Duterte and the dictator 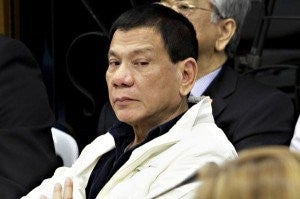 The leader who instigated a bloodbath that has killed 2,000 Filipinos wants to honor a dictator who murdered 3,000 and tortured tens of thousands more.

It’s a troubling, challenging time. But also a time of resistance and struggle.

On September 7, Filipinos throughout the United States will protest a shameful farce: the plan to bury Ferdinand Marcos at the Libingan ng Mga Bayani, the Heroes’ Cemetery.

There will be demonstrations in San Francisco, Chicago, Los Angeles, Washington D.C., Vancouver, Guam and Saipan. Other protests are being in planned in other cities.

Of course, the reaction from Malacanang will likely be predictable: ‘E tangina nilang mga ulol.’

We just have to get used to this. That’s the new leadership style and tone.

But based on our experience with the tyrant Rody Duterte wants to honor as a hero, we know what must be done: Speak out.

Silence is not an option.

Worried about trolls and mean-spirited commenters?

Just ignore them. Just keep speaking out, continue creating Facebook groups and posting opinions. Don’t stop engaging others, including those who may not agree with you, who still support Duterte, but who you know believe in decency and democracy.

Overseas Filipinos have a particularly important role in this time of crisis — the same role they played during the fight against Marcos.

Many Filipinos are leading this fight back home and we know what they’re up against: a leader his supporters portray as strong and decisive, but who slowly has been exposed as petty and arrogant.

And who is behaving more like the bully the nation overthrew three decades ago.

The beleaguered but courageous chair of the Commission on Human Rights has been told to just shut up. Women leaders in government have been insulted and shamed. They’ve been called “gago” and “ulol.”

Still, leaders like Chito Gascon, Kiko Pangilinan and Risa Hontiveros, and many other activists and concerned Filipinos, are speaking out and taking the lead.

But they need our help. And here’s good news: For overseas Filipinos, it is so much easier to speak out today than during the Marcos years.

In the 1970s and 1980s, Marcos easily and swiftly shut down any publication that dared criticize him or exposed his lies. The small and struggling WE Forum newspaper was raided in 1982 after the gutsy editor Joe Burgos and his staff dared to expose Marcos’s war medals.

That could still happen but it’s much harder for any despot to clamp down on free speech today.

So just speak out, keep asking tough questions, keep sharing articles you know reflect what’s going on, keep explaining to others the troubling events back home.

Yes, trolls and cyberbullies can be annoying and even threatening. But here’s one tactic that has worked for me for nearly a decade since I began writing this column: Just ignore them.

Continue to engage those with whom you could have sincere conversations about what’s going on, who deep down believe in human rights and democracy.

The Marcos forces are betting that nobody cares about what the dictatorship did, that young Filipinos who never knew martial law will be easily deceived.

We will prove them wrong. They’re already being proven wrong.

I had told friends who support Duterte that if Digong turns out to be the strong, decisive, progressive leader we’ve all been hoping for, I would take back everything I’ve said about him.

But surely one thing is clear by now especially to friends with whom I marched against dictatorship: Slaughtering 2,000 people without due process, including 5-year-old Danica May, is wrong. Honoring the dictator who caused so much damage to our country is wrong.

To overseas Filipinos who have voiced concern over what’s going on, don’t waste your time with mean-spirited online thugs and fake or unreliable news sites.

We know so much more from our long, arduous, but ultimately victorious fight against the dictator Duterte says should be buried with the nation’s heroes.

Hopefully, the time will never come when we must remove the “and” in the headline of this column.

We defeated a dictator 30 years ago. We can do it again.