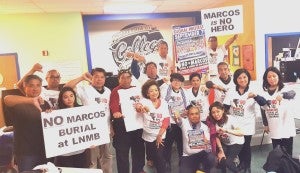 SAN FRANCISCO — Filipino American groups in Northern California banded together to plan protests against the proposed burial of the remains of the dictator Ferdinand Marcos at the Libingan ng mga Bayani (LNMB).

Called the San Francisco Kontra Libing Coalition, the group is composed of San Francisco Bay Area organizations and individuals opposing not just the Marcos burial, but also “the current political climate in the Philippines that leads to suspicions of a return to martial law or martial law-like governance.”

The burial of Marcos at the LNMB might be imminent upon the expiration of the temporary restraining order issued by the Philippine Supreme Court, which is currently hearing arguments on the issue.

The coalition will hold a protest rally at noon, September 7, Wednesday, in front of the Philippine Consulate General in San Francisco in tune with the global protests in front of Philippine Embassies and Consulates worldwide.

The Kontra-Libing Coalition released a statement against the order of President Rodrigo Duterte for a hero’s burial “for Philippine dictator Ferdinand Marcos at the Libingan ng mga Bayani (Heroes’ Cemetery), not because we harp on the past, but because we care about our country’s future.”

President Marcos, the coalition stated, is not a hero but a criminal, thus not deserving of a place in the Libingan ng mga Bayani and that a “hero’s burial glosses over the crimes he committed against the Filipino people during the fourteen years he usurped power.”

“When a people power uprising finally booted him out of the country in 1986, he fled with an estimated $10 billion worth of plundered loot hidden worldwide. He left the economy in shambles, with $28 billion of external debt, an inflation rate of over 50percent, a 58.9 percent incidence of poverty, and a negative economic growth rate,” detailed the coalition statement.

“Marcos also dealt brutally with those who opposed his one-man rule. Amnesty International estimates the number of opponents killed by the Marcos dictatorship at 3,240, raped and tortured at 34,000, and number imprisoned at 70,000.”

A “hero’s burial,” the coalition states further, would help erase hard-earned lessons in the fight for democracy at a time rife with “President Duterte’s cynical statements against due process and human rights, and his bandied about threats of imposing martial law in his war against drugs.”

Marcos deserves condemnation, not hero’s honors, the group stated, and that honor should be given instead to the victims of martial law “who all deserve justice that include indemnification under the Human Rights Victims Repatriation and Recognition Act of 2013.”

For the coalition, the true heroes “gave up their lives in brave defiance of his illegitimate authority, and in courageous struggle against corruption and injustice. Throughout the dictator’s reign, there were activists who refused to be silenced, and in the end, over two million Filipinos spilled into the streets, stood in front of army tanks and forced the dictator, his family and minions to flee for their lives.”

The coalition also extended its support for the petitions filed before the Philippine Supreme Court to stop the burial of Marcos at the Libingan ng mga Bayani set for September 18, arguing that President Duterte should not hide behind technicalities that make it permissible for Marcos to be buried in a cemetery reserved for heroes.

They called on the Supreme Court to continue to restrain the Duterte administration from proceeding with the current and any future plans to bury Marcos at the Heroes’ Cemetery. 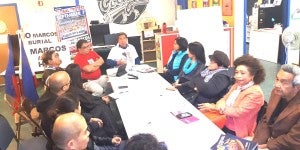 “A hero’s burial for Marcos plays into the hands of the Marcos family, who are staging a political comeback, as with the recent vice-presidential electoral bid of the dictator’s son, Bongbong Marcos. Marcos Jr.’s brazen refusal to acknowledge his father’s human rights abuses and theft of billions of dollars, and his bald-faced glorification of his father’s rule, makes him a threat to the country should he succeed in getting elected to the highest offices of the land,” the statement continued.

Filipinos in the U.S. became a resounding voice of opposition against the dictatorship in their homeland, the group stated.