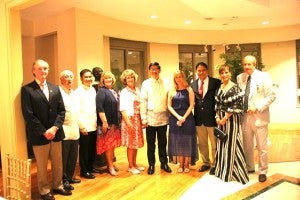 The Jones family with Minister Patrick Chuasoto (sixth from left), US-Philippines Society President, Ambassador John Maisto (second from left), and other guests during the Jones Law Centennial Dinner at the Romulo Hall of the Philippine Embassy. CONTRIBUTED

WASHINGTON, DC — A commemorative dinner at the Philippine Embassy replicated a similar one held at a hotel in the capital a hundred years ago to celebrate the enactment of the Jones Act, or the Philippine Autonomy Act, which paved the way to eventual national independence.

“Yesterday was a milestone in the history of the Philippines as a nation, and of Filipinos as a people. And we are gathered to commemorate a historic and momentous dinner that took place in this city, at a hotel not too far from here, one hundred years ago last night, ” said Minister Patrick A. Chuasoto, charge d’affaires ad interim of the Embassy to nearly 30 guests at the Embassy’s Romulo Hall August 30. 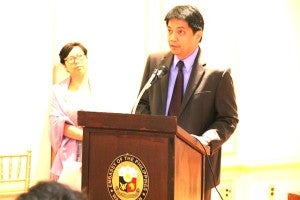 Professor Erwin Tiongson and his wife, Titchie Carandang-Tiongson, discuss the historical significance of the Jones Law and the 1916 Banquet at the New Willard Hotel. CONTRIBUTED

In cooperation with the US-Philippines Society, the Embassy the centennial of the Philippine Autonomy Act of 1916, more popularly known as the Jones Law, by hosting the dinner, similar to the one hosted by then Philippine High Commissioner Manuel L. Quezon at the New Willard Hotel on August 29, 1916.

The Jones Law, named after its proponent—Congressman William Jones of Virginia—laid down the framework for a more autonomous government, preparatory to the grant of independence to the Philippines by the United States.

Through this law, the Philippines saw the creation of a bicameral legislature, the introduction of a representative electoral process and the recognition of the fundamental civil and political rights of persons living within the bounds of the Philippine Islands.

As the guests enjoyed the appetizer course of chilled pickled okra, Erwin Tiongson, a professor at Georgetown University’s School of Foreign Service, and his wife, Titchie Carandang-Tiongson, made a brief presentation on the historical significance of the Jones Law and the 1916 Banquet at the New Willard Hotel. 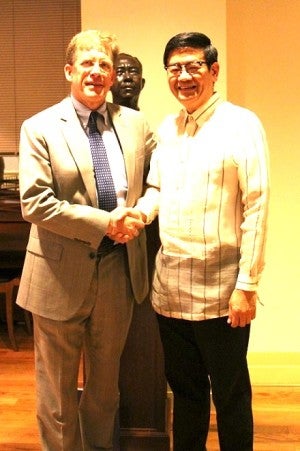 The husband-and-wife team also spearheads the ongoing project Philippines on the Potomac, to help Filipinos and Filipino Americans better understand the Philippines-US alliance, partnership and friendship. Chuasoto noted that “it is in looking back, seeing how far the Philippines has come, that insights can be drawn for forging ahead into the future.”

With the period music “The Manila Waltz” playing softly in the background, the guests enjoyed a classic French menu by candle light, replicating the 1916 dinner. After the okra, the main course was chicken with perigeux sauce, petit pois and potato lorette. Sliced Virginia country ham was served in platters. A light hearts of romaine salad capped the meal, before petit fours and peach mousse were served with coffee.

Representing the US Government at the dinner was Deputy Assistant Secretary of State W. Patrick Murphy, who also offered remarks that stressed the importance of the bilateral relationship between the Philippines and the United States.

The evening was even made more memorable by the presence of two great-granddaughters of Congressman Jones, Elizabeth and Anne, and Elizabeth’s own daughter, Marjorie Boehlert.

In her after-dinner remarks, Elizabeth Hart Jones noted that the Congressman’s work on the Philippine Autonomy Act did not only take a great toll on his health, but also required a great deal of moral courage.

“At that age of empire building, it was a radical idea to let go of a treasured territory like the Philippine Islands. However, Congressman Jones had a profound belief that the United States had a more important mandate to promote freedom around the world,” said Jones. She quoted from the speech of a colleague of Congressman Jones describing the latter’s mood after the passage of the law: “He was only gratified to have helped extend the frontiers of human freedom.” 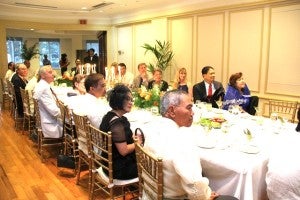 The Philippine Embassy in cooperation with the US-Philippines Society commemorates the centennial of the Philippine Autonomy Act of 1916 (Jones Law) by hosting the Jones Law Centennial Dinner on August 30, 2016. CONTRIBUTED

Professor Tiongson, in ending his presentation, said that “it is fitting that one of the more lasting memorials to William Jones is a bridge (in Manila). Fitting because what was the Bridge of Spain was renamed in 1916 in honor of the person who best represented the bridge between the US government and the Filipino people. Fitting because Congressman Jones best represents the bridge between America’s global responsibility and its essential commitment to human liberty and self-determination everywhere. Fitting because Congressman Jones is the bridge that once again brings together Filipinos and Americans at dinner tonight, just as he did a century ago.”

Ambassador John Maisto, president of the US-Philippines Society, closed the evening by recalling the legacy of democracy and representative government achieved by the efforts of Congressman Jones and others like him. “Tonight, we also celebrate the friendship between our two peoples and our shared history,” he added.

The Jones Law Centennial Dinner is part of the series of activities organized by the Philippine Embassy to celebrate the 70th year anniversary of the establishment of diplomatic relations between the Philippines and the United States.