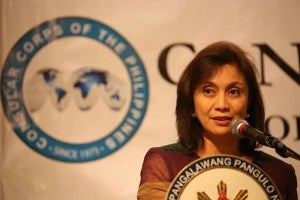 MANILA — They are the “giants” and “modern-day heroes” who serve as reminders that the world is getting better, not worse.  They put flesh to ideas, which when used to cultivate humanity, are “more powerful than guns” and “more commanding than dictators.”

This was according to Vice President Leni Robredo in ceremonies that honored this year’s six winners of the Ramon Magsaysay (RM) Award, Asia’s version of the Nobel Prize.

The six Asian heroes were formally recognized in awarding rites on Wednesday at the Cultural Center of the Philippines that also paid tribute to the 1962 RM awardee for international understanding, Mother Teresa, who will be made a saint by the Vatican onSept. 4.

“I thank the [RMAF] for showing us consistently for 50 years now that giants walk among us. The annual search reminds us of something so beautiful: that our world is getting better, not worse,” said Robredo.

“That we can, if we so desire, unite rather than divide. That beyond the daily desperation, we can choose to find inspiration and act on them,” said Robredo in her congratulatory remarks.

Robredo said she was deeply honored to address the ceremonies as the RM awardees were chosen for living for causes bigger than themselves and for helping change society in a major way and that her late husband Jesse also accepted the RM award 16 years ago.

The vice president previously attended the occasion twice—when her husband accepted the award for government service in 2000 and in 2012 when the RMAF paid tribute to the late interior secretary following his death in a plane crash.

Jesse died with two others when the plane he was aboard en route to Naga City crashed in waters off Masbate City on Aug. 18, four years ago.

While remembering her husband’s influence and hard work to help change society and paying tribute to each of this year’s awardees, Robredo encouraged others to play their part and move to become “the final leg” of the awardees’ work.

“It is not just [the six awardees] who are players in the games of humanity and inspiration. You are, too,” she said. “Find the giant and the hero in you and the sacrifices and hard work will finally find root in the societies of the world.”

“Without you, without your daily acts of kindness and inspiration and goodness, the awards will not be fully successful. It is you who will give the final free throw,” she added.

She also said ideas were more powerful than guns, persuasive than money and “more commanding even than dictators,” when used to cultivate humanity.

She lauded Wilson for going against centuries of social mind conditioning and liberating hundreds of thousands of “dalits,” India’s untouchables, from manual scavenging of human waste and the guts of the volunteers of Vientiane Rescue for running a 24/7 emergency assistance to victims of road accidents despite meager funds.

Robredo also praised Krishna for teaching aristocratic Karnatik music even to the underprivileged, liberating people from “artificial divisions of caste and race.” “This is how you remake the fabric of culture and literally create a better world,” she said.

The leaders of Dompet Dhuafa were also true examples of integrity through their full transparency and accountability in running their philantrophic organization that allowed zakat collections to genuinely benefit the poor, she said.

“You see, the true test of integrity is how people handle money. Money and the power that comes with it can sometimes blind even those who have good intentions…but I believe the leaders of Dompet Dhuafa have figured this out,” she said.

Robredo also lauded Morales for “her strict, professional and systematic efforts” that “have resulted in the makeover of the Office of the Ombudsman, turning it into a beacon of hope for a nation yearning for stronger institutions.”

As for JOCV, she said its work should be emulated as “there is much need for efforts to create acceptance and tolerance…so we can build a world of real solidarity.”  SFM