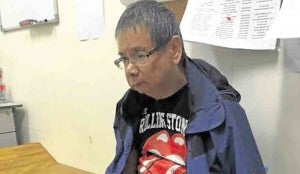 American Alan Soo Hoo was caught with over two kilos of cocaine in his luggage at the Clark International Airport. (PHOTO FROM THE CLARK INTERNATIONAL AIRPORT CORP.)

MANILA — An elderly American of Chinese descent has been charged with violating Philippine immigration laws after his arrest for attempting to traffic more than two kilos of cocaine into the country.

The Bureau of Immigration’s law and investigation division charged Alan Soo Hoo, 68, with undesirability and for acts inimical to the public interest.

This was following the elderly American’s arrest at the Clark International Airport on Sunday night for attempting to smuggle more than two kilos of cocaine in his check-in luggage.

“For being a drug mule, his presence here poses a serious threat to our youth. He should be expelled, blacklisted and banned from re-entering our country,” said BI commissioner Jaime Morente.

Soo Hoo, a resident of New York City, was travelling to the Philippines from Dubai when he was caught by the Clark Inter-Agency Drug Interdiction Task Group. It was his first time to the country.

The more than two kilos of high-grade cocaine was hidden in a secret compartment in his check-in luggage. The elderly man is now in the custody of the Philippine Drug Enforcement Agency.

Morente clarified that the foreigner would not be deported while facing in court the charges for violation of Republic Act 9165 or the Comprehensive Dangerous Drugs Act.

“If he is convicted, he should first serve his jail sentence after which we will deport him and place him on our immigration blacklist,” the BI commissioner said.

The BI board of commissioners chaired by Morente will be issuing the order for Soo Hoo’s summary deportation.

Morente said the BI tipped the PDEA and the Bureau of Customs about Soo Hoo’s impending arrival on Sunday night.

It was learned that officials from the U.S. Department of Homeland Security alerted BI intelligence officials about the possible arrival of the foreigner from Dubai.

This prompted the agency to check with Emirates Airways if the suspect’s name was in the passenger manifest of its flight from Dubai.

Upon confirming that Soo Hoo was indeed aboard the flight, the BI passed on the information to the anti-drug interdiction task force at the Clark International Airport.  SFM