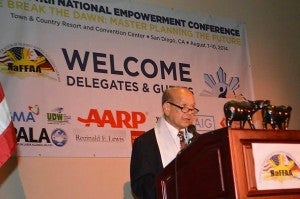 He was surrounded by his family, who kept vigil for days until he passed away at the St. Joseph Mercy Hospital of Oakland in Pontiac, Michigan. He was 72.

“We lost a pillar of the community,” says NaFFAA National Chairman Brendan Flores. “Tito Ed was always extremely dedicated and we all looked up to him with great admiration and respect. He was the epitome of servant leadership. His legacy will live on.”

A charter member of NaFFAA, Navarra was among the nearly 2,000 Filipino American community leaders who converged in Washington, D.C. in August 1997 to organize the first National Empowerment Conference (NEC). Michigan sent one of the largest delegations to the historic event, due in no small measure to Navarra’s influence. He has consistently attended all 12 national gatherings in the last 19 years.

“Ed Navarra was completely dedicated to NaFFAA and its empowerment goals,” says Loida Nicolas Lewis, National Chair Emeritus and one of the founders of the organization. “He shepherded NaFFAA when it needed tender loving care, infusing it with his passion for advocacy, especially on issues that matter to Filipinos in the United States. We are all enriched by his leadership.”

Greg Macabenta, whom Navarra succeeded as National Chair, calls his passing “a great loss to NaFFAA and to the entire Filipino-American community. He was dedicated to the cause of unity and empowerment and he worked hard at it — but he went about it in his own charming way, always good-natured and always with that mischievous quip in the course of a heated discussion. Ed was also a very sweet and thoughtful person. On at least two occasions after a NaFFAA conference, he handed me a box of chocolates to bring home to my wife.”

Board Member Rozita Lee also remembers Navarra as a delightful person with a wry sense of humor, which has endeared him to many friends and colleagues. “He kept us laughing all the time, providing comic relief especially after a tense discussion,” she says.

Adds Gloria T. Caoile, National Vice Chair Emeritus and a NaFFAA founder: “We love the way he loved life, his devotion to his wife Vicky and his children and grandchildren, and the way he laughed about the absurd things that came his way.”

Among the young people Navarra mentored is Kelly Ilagan, who studied International Studies and Political Science at Michigan State University. Inspired by Navarra, she attended the NEC in Philadelphia for the first time.

“Tito Ed was a father figure who believed in me,” she says. “He encouraged my generation to be engaged in our country’s political process. Everyone claims to want the youth to be involved in community organizations, but he always acted on it.”

During his four-year term, NaFFAA started rebuilding its infrastructure to strengthen the FilAmVote program, a key vehicle for political empowerment in this country.

In 2006, he received the prestigious Presidential “Banaag Award” for Community Service by then Philippine President Gloria Macapagal Arroyo.

A dedicated Republican Party member, Navarra was appointed by the Republican National Committee in 2013, one of four Filipino American leaders to sit in the Asian Pacific American Advisory Council.

The youngest of three children, Eduardo Navarra was born on Oct. 27, 1944 and grew up in Sigma Capiz, Philippines. He is survived by his wife Dr. Victoria Gallardo Navarra; their children John, Laura and Nicole; daughter-in-law Rachel; sons-in-law Jeffrey Haxer and Kyle Winkelman; and grandchildren Tristan, Lucas, Evelyn, Eleanor and Zoe Victoria.