Peace amid the bloodbath 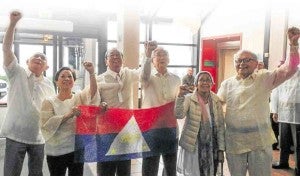 It’s hard to celebrate peace amid a bloodbath. It’s hard to cheer the end of a civil war when hundreds of people branded as criminals have been killed without due process in a merciless witch-hunt.

But we should celebrate. Peace at last …. hopefully.

A war that has raged for 50 years and has claimed more than 30,000 lives may be coming to an end. And that’s great news, the best since President Duterte took office.

It’s also a good time to reflect on why the war started in the first place. Why did young Filipinos, many from middle-class, affluent families, join the armed revolution and the underground movement?

One answer can be found in the story of Luis Jalandoni. You can see him in the Inquirer.net photo on the report on the signing of the ceasefire.

The now white-haired National Democratic Front leader is smiling, a clenched fist raised, while standing in front of the rebel movement’s banner and next to Joma Sison, the CPP founder and other rebel leaders. The caption reads, “Winning Moment.”

Jalandoni comes from one of the rich hacendero families in Negros. As a priest, he came face to face with the injustice endured by working class Filipinos at the hands of the landlord class to which he belonged.

These encounters changed him.

“I became more and more out of place at social gatherings of the landowners,” he told me an in an interview for my book “U.G. An Underground Tale.” “But then I became more and more at home at social gatherings, festivities of the sugar workers and peasants. … I lost a lot of my friends from the landowning class but gained a lot of friends among the sugar workers and peasant settlers.”

The war began in the late 1960s when the CPP and its armed wing, the New People’s Army, which later became the core organizations within the NDF, launched a protracted guerrilla campaign.

But the conflict was more than just a shooting war. It was a political struggle waged in the cities, where young activists sought to break the wall of silence and fear under the dictatorship of Ferdinand Marcos.

Jalandoni played a critical role in a major battle on this front.

In October 1975, he and another underground activist, the student and labor leader Edgar Jopson, led about 500 workers in a bold but extremely dangerous act of defiance.

The La Tondena Strike is remembered as the protest action that shattered the climate of fear that engulfed the country after Marcos imposed martial law in 1972.

But it was a risky gamble that Jopson and Jalandoni feared could lead to a massacre. Marcos had banned all labor strikes, and his military responded mercilessly to any form of dissent.

Jalandoni, Jopson and other UG leaders urged the La Tondena workers to consider other less confrontational and dangerous options. But the workers rejected their appeal. The strike must push through, they insisted.

When I interviewed him years later, Jalandoni still remembered an incident that moved him, Jopson and the other UG cadres. During a secret meeting before the strike in which a woman worker declared, “Dapat nating ituloy. We must go on with it. Otherwise, our children will have no future.”

Other activists I interviewed for my book cited similar encounters that made them join the underground cause — stories of intense repression and courageous struggle of poor Filipinos who were willing to risk their lives so their children could have a better future.

That, in a way, makes the peace that Jalandoni helped broker ironic, even sad.

A long war is ending, even as new one, more vicious and cruel, is raging stronger, claiming more victims.

The ceasefire and peace talks will not mean anything to Danica May. The little girl was killed in an anti-drug vigilante assault that the Duterte regime has essentially endorsed. She was 5.

Peace could save lives — but will it end the bloodbath, the Duterte-inspired campaign portrayed by many as a war on human rights and the poor?

Jalandoni had recalled another scene when I interviewed him about the La Tondena strike more than two decades ago.

During the secret meeting before the La Tondena Strike, when the activists and the union members were still debating whether to proceed with the protest action, he said a young man “hardened by years of work” stood up and said, “Limang taong galit na nasa loob ng aking dibdib ang kailangang pumutok bukas. I have five years of frustration and bitterness inside me that must find release tomorrow. …We must go on with the strike.”

Ferdinand Marcos was then still at the height of his power, popular among a segment of the population and feared by the rest.

In welcoming and celebrating the end of the war, it makes sense to ask: How much frustration and bitterness are slowly building up in the communities bearing the brunt of this new war, of Duterte’s terrible campaign?

And when will all that rage boil over?