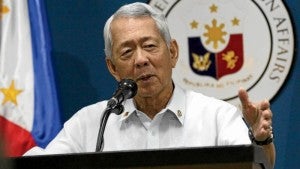 MANILA — Foreign Affairs Secretary Perfecto Yasay Jr. has summoned the Chinese ambassador to the Philippines over the deluge of illegal drugs traced to China.

Yasay’s move is in pursuit of President Duterte’s intent to seek Beijing’s clarification on why most drug lords operating in the country are its citizens.

In a meeting of the Senate committee on foreign relations on Wednesday, Yasay told senators that he called Chinese Ambassador to the Philippines Zhao Jianhua on Monday for a dialogue on the involvement of Chinese citizens in the local drug trade.

“I had summoned the Chinese ambassador to the office precisely to ask him about this question about drugs, and the report of the President that is based upon the investigation and findings that [are] well based,” Yasay said under the questioning of Sen. Richard Gordon.

He said Zhao promised to work with Philippine authorities on the matter.

He said he would heed Gordon’s call for the DFA to send China a note verbale to formally seek Beijing’s explanation on the supply of drugs in the Philippines from China.

“I have directed the formalization of your request, and we are sending a note verbale to precisely pursue this on a more aggressive note,” Yasay said.

In his letter sent to the DFA on Tuesday, Gordon asked Yasay to send a “vigorous note verbale” to China “to raise a level of dialogue and cooperation, requesting a more robust task force” through collaborations between the two sides on law enforcement.

Gordon proposed the creation of a joint task force “to identify patterns of passengers” who might be carrying contraband from China to the Philippines, and to “gather collective intelligence.”

The two sides should also “initiate capacity-building initiatives … against the transnational trafficking of drugs.”