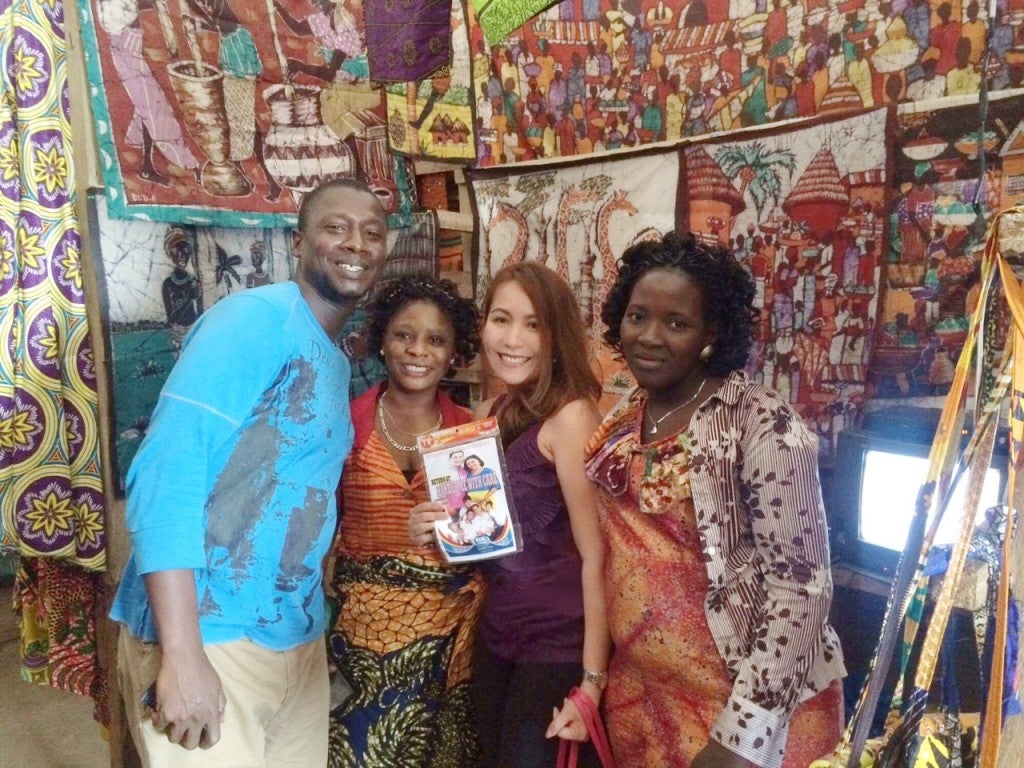 The author (3rd from left) was more than surprised to find DVD copies of soap operas from the Philippines, in all places, at Freetown’s Big Market. CONTRIBUTED PHOTO/Daisy Diamante

FREETOWN—Very rainy season in the capital of Sierra Leone. The West African country is in the midst of its seasonal rains divided into two—rainy and very rainy, and we arrive at the time where each blade of grass is soaked and fat with moisture, each gutter in the city streets rushing with brown rain water with sows and piglets foraging in hock-high streams. Right in the middle of organized melee and within sniffing distance from the nearby wharf sprawls Freetown’s Big Market.

We jump across puddles and hike up a couple steps on splintered wood wet at its seams and enter a dark building and wait for our eyes to adjust. Not enough light was streaming in and the air smelled like what was outside, wet and musty and peppered with the wafts of half-eaten spiced meals.

West African masks stared from the dark, necklaces of beads and glass twinkled gently under the low lights, and fabrics in a kaleidoscope of colors and patterns of optical illusion prints hung low.

Out of the muted lights and murmurs of men chatting quietly in the darkened hallways, a woman came out, then one, then two until a group of women stared at two Filipinas, pale and confused in the midst of fabrics. They said the word “Filippine” in awe and giddy delight normally given to B grade celebrities or toothpaste TV commercial models.

Perturbed with the minor commotion, we let the women drag us into one stall and there on the piles of brilliant fabrics lay a stack of DVDs with titles ranging from “Be Careful with My Heart” to “The Promise (Pangako sa Iyo)”.

How can a West African nation beaten to its knees with its decade-long civil war and recent debilitating Ebola crisis that left thousands dead relate to Philippine drama? How can these women struggling to make a living in a half darkened market feel so strongly about an Asian girl pining for someone outside her economic marriage zone? 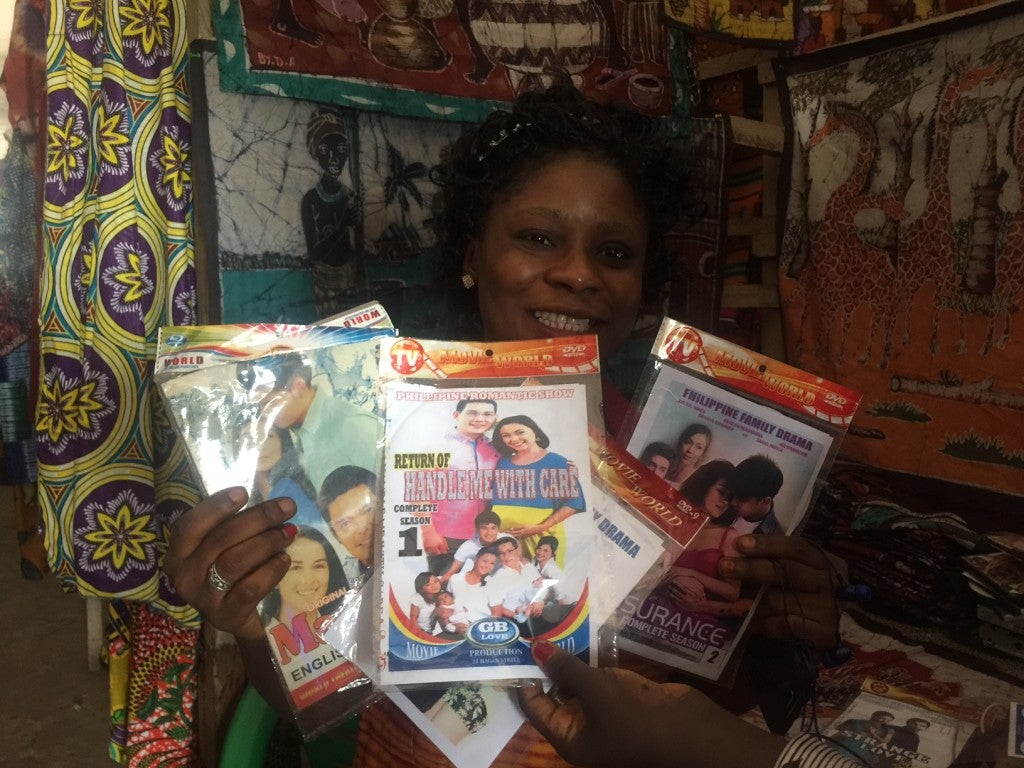 Some sellers of native fabrics in the market are, surprisingly, also offering these “gems” from the Philippines. CONTRIBUTED PHOTO/Daisy Diamante

All about love and oppression

The answer lies in the eyes of the women as they describe giddily in a mix of Creole English the plot line of each DVD. Love and oppression can indeed cut across languages, cultures and geography. Globalization does not just encompass the crisscrossing of products and the data traversing the Internet but it also covers those flimsy bootlegged DVDs that have the power to bring down hostility, cut across cultural barriers, and forge a connection between strangers coming from alien cultures.

The soap operas are bootlegged DVD darlings in Sierra Leone. Martha, the woman from the fabric stall, strongly relate to Philippine stories and as she vividly explained, “I love Sir Chief (in ‘Be Careful with My Heart’), the stories make me forget about my struggles, and I can feel that I am not alone in the things I go through.”

Sierra Leone, with a population of around seven million with majority of the people Muslims, has a number of things in common with the Philippines—stories of leaving the village for the city for a better life, poverty, patriarchal values, poor girl meets rich man, natural disasters, old family values, and other salient themes about love and oppression. 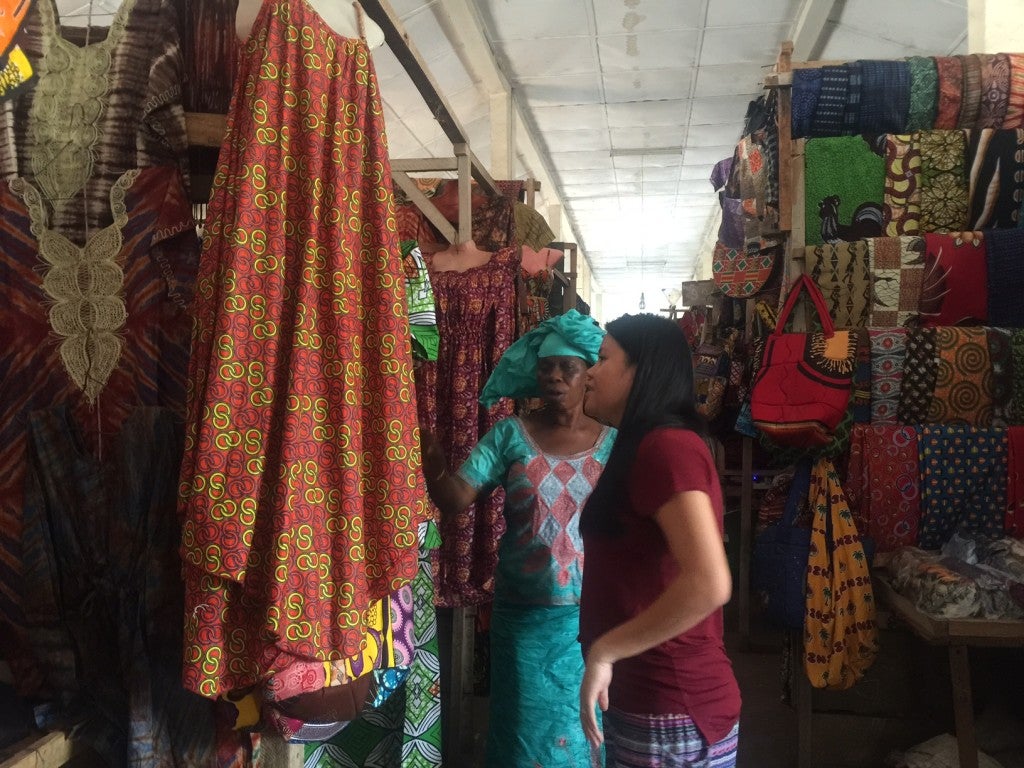 Elle Francisco, a Filipina, checking out the peplum dresses in the Big Market. CONTRIBUTED PHOTO/Daisy Diamante

When prodded on the obsession about the Filipino soap operas, Hilda, a civil society worker living upcountry, hundreds of miles away from the capital, said, “Who does not relate to a fairy tale story? A poor girl from the country wanting to take care of her family she left behind in the village and dreaming to marry a rich man? It is every woman’s wish, right? And when we watch your shows…yes, the actors may look exotic to us but then we realize that they suffer through the same issues like what we have and it just resonates.”

While other soap operas from other countries are available, Sierra Leonians prefer the Philippine-produced ones. Hilda continued, “The ones from Mexico are a bit farfetched for us, they look beautiful with nice cars and they look like they are straight from magazines. The same case with the American ones. But the Philippine stories are much more raw, more realistic, and we can easily identify with their challenges because that is what we go through every day. The family values are there and we can see there is a strong connection to old traditions.”

Soap operas may run along the story lines of a Cinderella story but what makes Philippine soap operas catchy is the ability to leave the audience hanging. Cisse, another vendor in the Big Market, said, “It is crazy, we talk about this every day, it is something else we can talk about besides our problems. And it is more interesting, even the children watch it and they are fascinated. Our culture revolves around stories and we just love the way how the surprising turns are weaved into the stories and it catches us off guard the whole time.”

Sierra Leone is just one of the handful countries in Africa that got bitten by the Philippine soap opera bug and it has been reported that on the other side of the coast in East Africa, from Kenya to Uganda, these soap operas have caused minor uproars—traffic jams have been reported when female employees rush home because the TV drama starts in the early evening or wives would not serve dinners when the husbands commandeers the TV for a football match.

Quite a phenomenon and love is indeed universal. As Shakespeare, the pioneering soap opera writer in Othello scribbled, “I know a lady in Venice would have walked barefoot to Palestine for a touch of his nether lip.” So from Manila to Freetown—love it is then. TVJ

(The author is a former journalist in Manila. She is now working for an international development organization. She is covering the 54-state African region and currently posted in northeast Africa.)