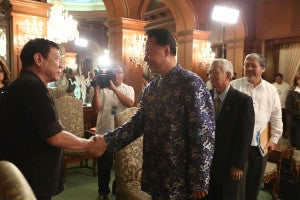 MANILA — President Duterte would not bring up the country’s territorial dispute with China before the Association of South East Asian Nations, saying he preferred to discuss the issue directly with the neighboring superpower.

Mr. Duterte said he would not want to antagonize China and jeopardize formal talks between the two countries.

“I will only bring the issue when we are together face to face,” Mr. Duterte, referring to China, said when asked in a press briefing if he would take up the issue with the regional bloc.

“If you quarrel with them now and you claim sovereignty, make noise here and there, they might not just even want to talk,” he added.

He pointed out that his special envoy, former President Fidel Ramos, has been working to smooth out the way for formal talks with Beijing. Ramos recently met with “old friends” in Hong Kong who happen to be Chinese officials.

“We maintain good relations with China. Let us create an environment where we sit down and talk directly. That is the time we would say we proceed from here,” the President said.

Should China refuse to sit down and talk, there would be nothing the Philippines could do, said Duterte.  The President added he would not be “stupid” and declare war with China, he added.

The Philippines recently won its arbitration case against China, with the international tribunal invalidating Beijing’s claim to almost the whole of the South China Sea.

Malacañang earlier said that the ruling would be the foundation of talks between the Philippines and China.

Mr. Duterte is scheduled to fly to Laos next month for the turnover over the chairmanship of the regional bloc to the Philippines.

While China is not an ASEAN member, it wields influence over its allies within the bloc, which had stalled earlier efforts for the group to put out more strongly worded statements about the territorial dispute in the South China Sea.

Aside from the Philippines, Taiwan, Vietnam, Malaysia, Brunei also have claims to the resource-rich area, which China is claiming in almost its entirety.  SFM 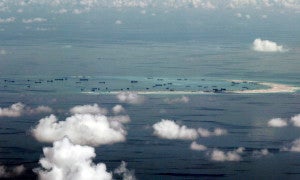 FILE – This May 11, 2015, file photo, shows land reclamation of Mischief Reef in the Spratly Islands in the South China Sea. A landmark ruling on an arbitration case filed by the Philippines that seeks to strike down China’s expansive territorial claims in the South China Sea will be a test for international law and world powers. China, which demands one-on-one talks to resolve the disputes, has boycotted the case and vowed to ignore the verdict. (Ritchie B. Tongo/Pool Photo via AP, File)