Filipino in Las Vegas arrested in death of estranged wife 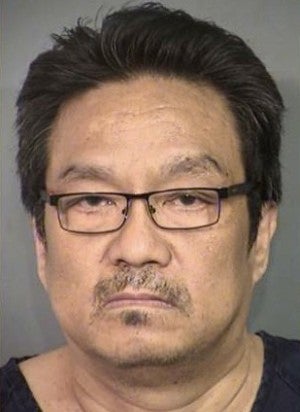 The Metropolitan Police Criminal Apprehension Team arrested Arthur Lopez, 55, on Tuesday, August 9, and took him to the Clark County Detention Center, where he faces a charge of murder with a deadly weapon.

An arrest report stated that Lopez killed his wife, Erlinda Penaflor, 78, in a home where she had rented a room after separating from Lopez whom she had described as verbally abusive. She had recently filed for divorce.

Lopez is reportedly addicted to gambling and drugs and stole property. He moved to Arizona for a job but often returned to Las Vegas, according to an arrest report.

He reportedly arrived unannounced at Penaflor’s residence and spent the night there. The victim asked friend to stay with her and her roommates because she was afraid of Lopez, who left Saturday afternoon.

The roommate went to church and when she returned home she found Penaflor in the living room in a pool of blood. Penaflor died from blunt force trauma to the head, the arrest report said.

On Monday afternoon police received a call from Lopez, who told the dispatcher, “I killed my wife,” gave an address and hung up the phone.