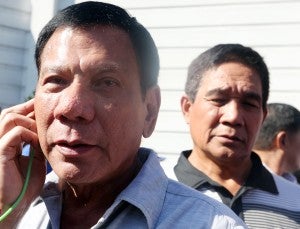 LABANGAN, Zamboanga del Sur — President Duterte underscored the need to prepare the country’s Armed Forces against the threat of terrorism.

“I see the looming problem. In three to seven years, we will have a problem with ISIS,” the President Duterte, who spoke mostly in Bisaya, told soldiers of the Philippine Army’s 1st Infantry Division.

ISIS is the Islamic State of Iraq and Syria, which has been winning converts among young and idealistic Muslim youth in Mindanao after the Bangsamoro peace process was stalled.

The military has so far refused to acknowledge the presence of ISIS in the country although the Maute group in Lanao del sur and the Sulu-based Abu Sayyaf have been styling themselves as ISIS affiliates.

Mr. Duterte related that in some parts of Mindanao, “there are white men (whom) I supposed are Arabs.”

“They don’t have weapons but they are into indoctrination. This is dangerous because they are targeting the thinking (of people),” he explained.

President Duterte said the big challenge now “is to prevent the ISIS disease from contaminating the Moro (population).”

According to Mr. Duterte, the ISIS is a dangerous lot, unlike the Moro revolutionary groups, “because they seem to hate people; they kill civilians (indiscriminately); and are into massacres.”

“That is really hard,” he said.

“I would rather that you be prepared,” he added.

President Duterte said that Defense Secretary Delfin Lorenzana advised him the Armed Forces might need about 20,000 men to beef up security in the areas threatened by the growing activities of the ISIS.

“I am preparing for that eventuality. Hence, I want people whom I can count on, and that is the military and police,” Mr. Duterte said.  SFM