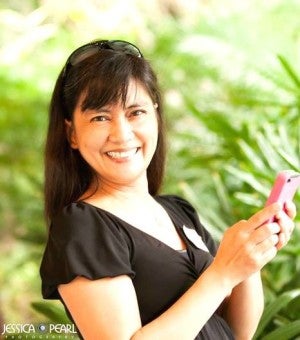 SAN FRANCISCO — Liza Pierce, 50, from Quezon City and a psychology graduate of the University of Sto. Tomas, is not your ordinary blogger who just relies on copy-pasted materials and other posts for her articles. Pierce is an award-winning blogger, who is known in Maui for her “conversational tone.”

Pierce is now the interactive media strategist of Wailea Realty Corporation, one of the top real estate companies in Maui. As a media strategist, she manages the social media engagement and internet marketing of the company, which also includes blogging.

Pierce held several jobs in the Philippines, including media coordinator and personnel assistant. In 1992 she met Bradley and they eventually dated. They continued their relationship through letters. Pierce recalls that her office had email but it was still very limited. The two made occasional long distance calls.

In 1994 they got married in the Philippines and eventually moved to Hawaii where her husband resided. Her two grown up kids, Gardner and Noelle, were born in Maui.

Writing was still far from her mind. Pierce worked as a secretary and receptionist. She did not experience discrimination because Hawaii is a “melting pot” of different cultures and nationalities, including many Filipinos. She is even sometimes mistaken for a native Hawaiian.

Blogging as a personal journey

In 2006 several sites started to create space for more people to express themselves. These included bloggers.com. Since Pierce was in multimedia and she believed she could do something creative, she started blogging. 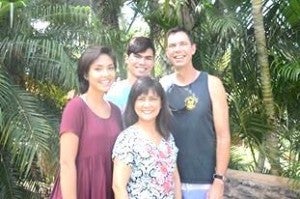 Liza with her family. CONTRIBUTED

“It was a form of retrospection for me at that time. I was a working mom and I needed an outlet to reflect out loud, so blogging was my tool to do that. Then it also became a way for me to meet other mommy bloggers. Later I focused on blogging about Maui and that became a big hit,” she explains.

Pierce first blog site was Liza’s Eyeview, which was all about personal help, counseling and other parenting advises. She says that blogging is more personal. She writes in a conversational tone and does not worry much about the grammar. She further explains that it is not formal writing.

“In Hawaii, we love to ‘talk story,’ that’s why blogging is ‘talking story online,’” says Pierce.

Pierce created http://www.amauiblog.com in December 2006. This is the introduction to her blog site: I do not have a journalism degree. I majored in Psychology. English is my second language. If you are looking for an eloquent writer, who is always grammatically correct and a wiz in spelling, you are in the wrong blog. But if you want to read the ramblings of a Kama’aina (and local kine mom) talking story online, you’re in the right blog. To Maui visitors checking out this blog, here is where you get the inside scoop.

Since then the blog site created lots of traffic and eventually gained media attention in Hawaii. Pierce says that A Maui Blog promotes Maui’s beauty, unique culture and aloha spirit. She also encourages people to promote Maui on social media. Her blog also seeks to be a booster for local Maui businesses, especially in a time of economic difficulty.

Since the internet is accessible to almost anyone, articles, stories, photos and video clips are now readily available. Plagiarism becomes rampant and copyright laws are not fully implemented due to laxity and difficult policing.

Pierce, however, does not condone the widely practiced copy pasting of articles or links. “Copying is a no-no. I see my blogging as storytelling, so it is always original and based on my experiences,” she says.

As a well-known blogger in Hawaii, Pierce is an ordinary Fil-Am mom who just wants to give back something positive to her adopted country.

“I am promoting Maui because I live here and I feel so blessed to live here. It is my way of giving back,” she says.

To the Filipinos abroad she has this to say: “Be passionate, be creative, be bold. Remember to bloom where you are planted, but never forget your origin as well.”

Read Next
Robredo delivers 30-day report to Fil-Ams
EDITORS' PICK
DILG to stranded workers: ‘Stay where you are’ until Luzon-wide quarantine is over
BREAKING: 1,075 people in PH has coronavirus disease – DOH
Style and music journeys with Claudia Barretto
UP-PGH wards for COVID-19 patients finished in 5 days
IATF: Food firms to operate with 50% of workforce during Luzon quarantine
Cebu City closes its borders
MOST READ
Tootsy Angara bares neighbor wanted them out of village
Pacquiao to seek probe on leaked private letter from Barangay Dasmariñas
Another doctor dies due to COVID-19 in Cebu City, doctor-husband critical
Lagman: Ban overseas deployment of Filipino medics, nurses for now
Don't miss out on the latest news and information.