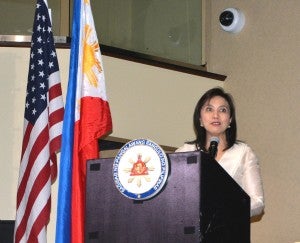 KING OF PRUSSIA, Pennsylvania — In this far away region of Pennsylvania, the Philippines’ newly elected Vice President Leni Gerona Robredo came to address Filipino Americans, who delivered her biggest overseas victory in the last election.

She specifically pointed out that North America, where many Filipino professionals reside, returned the biggest percentage of ballots in her favor. Robredo spoke before the national empowerment conference of the National Federation of Filipino American Associations (NaFFAA) held here last week.

At a press conference, Robredo gave a report detailing her first 30 days in office as vice president. She clarified that President Rodrigo Duterte did not appoint her to a cabinet position; she has no power in the government to execute projects.

Her appointment as chairperson of Housing and Urban Development Coordinating Council (HUDCC) is not a department and consists merely of a housing portfolio for coordination.

Robredo asserted that HUDCC needs institutionalization of processes and mandates, although the lack of mandate doesn’t mean she cannot do enough to solve the housing backlog. So, she spent the first three weeks compiling data.

Based on her findings, she concluded,“Nakakadismaya” (Disappointing.)

“Over the years HUDCC has not really been able to fulfill much of its mandate in the sense that, if we are expected to do policy works in housing, if we are expected to coordinate our efforts, at least we need the basic data,” she explained, referring to the lack of basic information for an effective urban development planning.

The Aquino administration spent 50 million pesos for relocation of houses, but the program was not maximized. She noted that the previous administration counted the number of houses built as an accomplishment (rather than as an activity) without undertaking a comprehensive urban development plan. 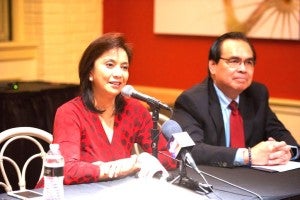 Her hope brightened when she discovered that there was in fact an existing study by World Bank, but it was never used. Robredo will adopt this study as she cannot go piecemeal; hence, she is in the process of identifying a six-year plan to determine what is an achievable target.

Several models are considered. Public rental is one, where someone without sufficient income should consider rental. The prevailing problem now centers on individual sales of property where people pay initial installments and soon incur default.

She had a meeting with Housing Authority in Thailand where there are no squatters. She also cited Singapore that requires a threshold income level that qualify dwellers either to rent or to buy. (Queen Sirikit of Thailand named her one of the Outstanding Women of 2016.)

Over the years, the government implemented off-site relocation that has failed. When government steps in to relocate residents, awardees take the property but due to lack of employment and adequate transportation, they wind up reselling their houses and moving back to the city.

The office of the VP has the lowest budget, mostly for administration and ceremonial purposes, but Robredo said she plans to reinvent her role. Starting from budgetary savings, cutting down her own office rental at Coconut Palace at P487000, she found a new place at New Manila that will save her budget P200,000 a month. She wants to use the savings to support her advocacy and implement a five-point core agenda.

Housing had been her advocacy even before, when she was a practicing lawyer, and was not part of her agenda until she was appointed as chair of HUDCC. Housing became her sixth advocacy.

From Mondays to Thursdays, Robredo disclosed that she talks to the “supply side,” tapping private organizations, embassies, foundations and stakeholders to do environmental scanning and identifying those doing programs related to the her chosen advocacies so she could match the beneficiaries.

She also suggested that nutrition governance programs must have efforts with measurable results. Hunger and malnutrition cannot be solved by feeding alone. For malnutrition statistics to go down, she says she intends to provide technical assistance.

From Fridays to Sundays, she focuses on her “laylayan” trips, visiting provinces, the farthest and the poorest of barangays. Her purpose is to listen and assess their needs in order to match beneficiaries with the supply side.

Starting September 20, 2016, she will call for a general summit of all stakeholders to ensure that every resource that comes in is translated into accomplishment. Her office will not accept donations, but will act only as secretariat and conduit.

As Robredo faces these humongous challenges consisting of six main advocacies, , she called on Filipino Americans to support her and be involved in engaging in social responsibility.

She also encouraged the youth to take trips back to the Philippines to understand what is happening, and take part in internship programs offered by different government agencies.

Finally, Robredo cited her project at her home city of Naga where the very first Migrant Resource Center was established to assist OFWs for pre-deployment and post-deployment requirements. For those seeking jobs abroad the center prevents them from getting scammed by recruiters.

For retirees who wish to come home, this center will provide information on available resources. Robredo hopes to replicate this program across the country.

A problem occurred related to the 30-minute press conference called by the Philippine Consulate General of New York on behalf of Robredo.

Over the six-year tenure of Consul General Mario De Leon, Jr., he maintained balanced working relations with the press and all stakeholders in the community. Diplomatic courtesies of the highest level meant including media members to interview visiting Philippines officials.

In this case, however, there was no protocol established by NaFFAA, the organization that invited Vice President Robledo. NaFFAA’s last-minute invitation to same media present during a mini-conference sent mixed signals where to go next. Several Fil-American media members scrambled to get to the remote location.

Members of Fil-American press lined up the hallway of a function room at Valley Forge Radisson Hotel where Robredo was expected to show up in a community “Meet and Greet.”

But the press members were initially told that only those who paid an additional $100 could enter, as part of NaFFAA’s fundraiser. Shortly thereafter, one of the reporters was yelled at by a NaFFAA officer, saying press people were not welcome to that private event. 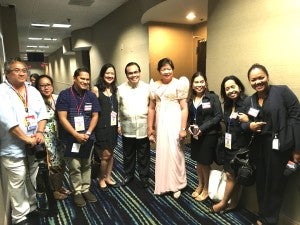 Some of the members started walking away while others remained after a security detail of her party allowed us to take just one picture. That was cut short when a hotel employee of Radisson announced that she was calling security to throw out all the reporters as “threats to security.” It was not clear if banishing of the press people was done by order of the same NaFFAA officer.

NaFFAA National Chairman Brendan Flores later issued an apology for the mix-up and the unfortunate exclusion of the Fil-Am press.

“We apologize wholeheartedly to members of the Filipino American media who were not treated properly and politely Saturday evening before the Private VIP Reception and NaFFAA Dinner Gala dinner in honor of Vice President Leni Robredo,” Flores’ statement reads.

“We understand they were yelled at and ‘rudely’ ordered by a NaFFAA staff and Radisson Hotel personnel to clear a hallway outside the private reception area for security reasons. NaFFAA takes full responsibility for any shortcomings committed around this unpleasant incident and other inconveniences that caused undue discomfort to members of the press.

“While we recognize that it was a difficult challenge trying to find a balance between ensuring the Vice President’s safety and security and providing fair and reasonable media access to our public events, we hope to learn from this unfortunate experience and strive to do better next time.”

Read Next
USCIS widens waiver eligibility of certain undocumented
EDITORS' PICK
Gov’t plans to open COVID-19 vaccination for 5- to 11-yr-olds by January 2022
Gov’t eyeing COVID-19 vaccine booster for essential workers, indigents by Dec. 10
Legarda: Ending Violence Against Women, a cause for all
Omicron variant detected in more countries as scientists race to find answers
Villar Group gears up for AllValue Shopping Party on Dec. 3; around P 1-million promos and discounts up for grabs
A delightful blessing!
MOST READ
Quiboloy warns of ‘much worse than Omicron virus’ if his ‘persecution’ is not stopped
Marcoleta defends pol ads on ABS-CBN
Gov’t to place countries under red list when local case of Omicron is detected
PH updates ‘red list,’ travel ban imposed on 7 more countries
Don't miss out on the latest news and information.