FORMER President Fidel V. Ramos on Monday officially began his mission as special envoy to China with a trip to Hong Kong to break the ice with old Chinese friends in the hope of rekindling relations with the superpower country, which has been strained by the territorial dispute in the West Philippine Sea.

Ramos left on Monday afternoon for Hong Kong with former Interior Secretary Rafael Alunan III, veteran journalist Chito Sta. Romana, his grandson Sam Jones, and his wife and former first lady Amelita Ramos, who he said will be his caregiver throughout the five-day trip.

In a press briefing prior to departure, Ramos described his trip as a “fishing expedition” to strengthen peace in the Asia-Pacific region and the first phase to renewing the friendship between the Philippines and China, after which formal bilateral talks could follow between government officials of the two countries.

He said “no substantive matters” will really be talked about even as President Duterte instructed him to merely “renew our friendship with your friends from China.”

The former President declined to identify his Chinese contacts but said that most of them, although not big investors, had business interests in the Philippines―mainly small ventures like making biscuits and televisions.

He said some of them were retired from their government but they could help influence China’s leaders.

Aside from holding dialogues, Ramos hinted at playing golf with his Chinese friends, who he said would be coming from various places in China like Haikou in Hainan province, Zhuhai in Guangdong and Shenzhen. 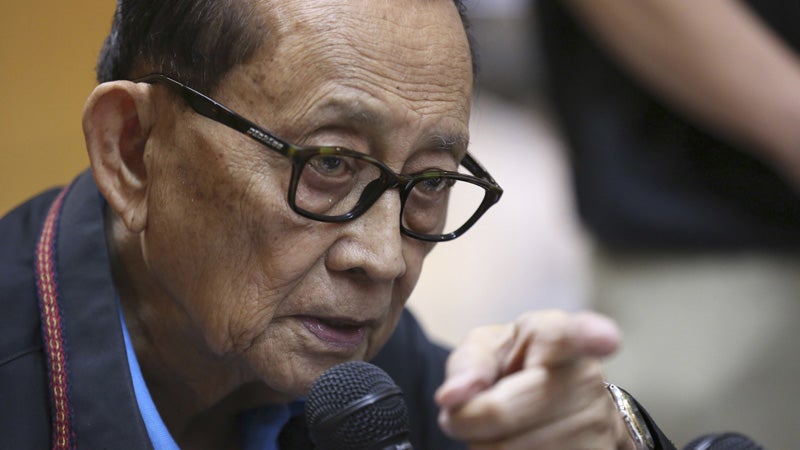 Former Philippine President Fidel Ramos gestures during a press conference before his flight at Manila’s International Airport in suburban Pasay, south of Manila, Philippines, Monday, Aug. 8, 2016. Ramos flew to Hong Kong on Monday for talks with long-standing contacts after being asked by current President Rodrigo Duterte to travel to China and start discussions on the South China Sea. (AP Photo/Aaron Favila)

Asked if he would bring up the favorable ruling of the United Nations arbitral court in July voiding China’s claim to almost all of the South China Sea, he replied: “I don’t know what my friends will bring up as a subject matter.”

“But it is not for me to bring it up because that is not my mission. My mission is to rekindle [our] friendship,” he said.

“Ramos is probably the best choice for the job of breaking the ice, since he is a revered statesman widely respected in his own country and in Asia,” it added in a commentary.