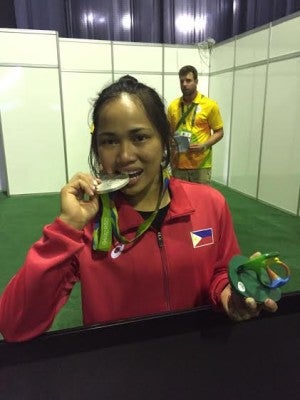 Weightlifter Hidilyn Diaz shows off her silver medal at the Rio Olympics, the Philippines first in the 2016 Olympics and also the country’s first in 20 years. (PHOTO BY TED S. MELENDRES/INQUIRER)

ZAMBOANGA CITY – Hidilyn Diaz’s family, friends and neighbors are rejoicing over her winning the silver medal for weightlifting in the Rio Olympics.

“I was on prayer barrage then, I had called all the saints for our prayers. It was at 2 a.m. (Monday) when one of my nephews called me, telling me Hidi bagged the bronze, then he called up again to correct that it was silver,” Emelita, Hidilyn’s mother, told the Philippine Daily Inquirer.

“We were all shouting here at dawn,” Emelita said.

Eduardo, Hidilyn’s father, said he could hardly walk as his feet were swollen (due to liver illness), but when he heard of his daughter grabbing the silver medal, he was jumping all around.

“I jumped with happiness, and I realized later that my feet were swollen,” Eduardo said.

“She went through a lot, and she deserves this,” Eduardo, a tricycle driver, said.

Hidilyn, 25, is the fourth of five siblings.  SFM