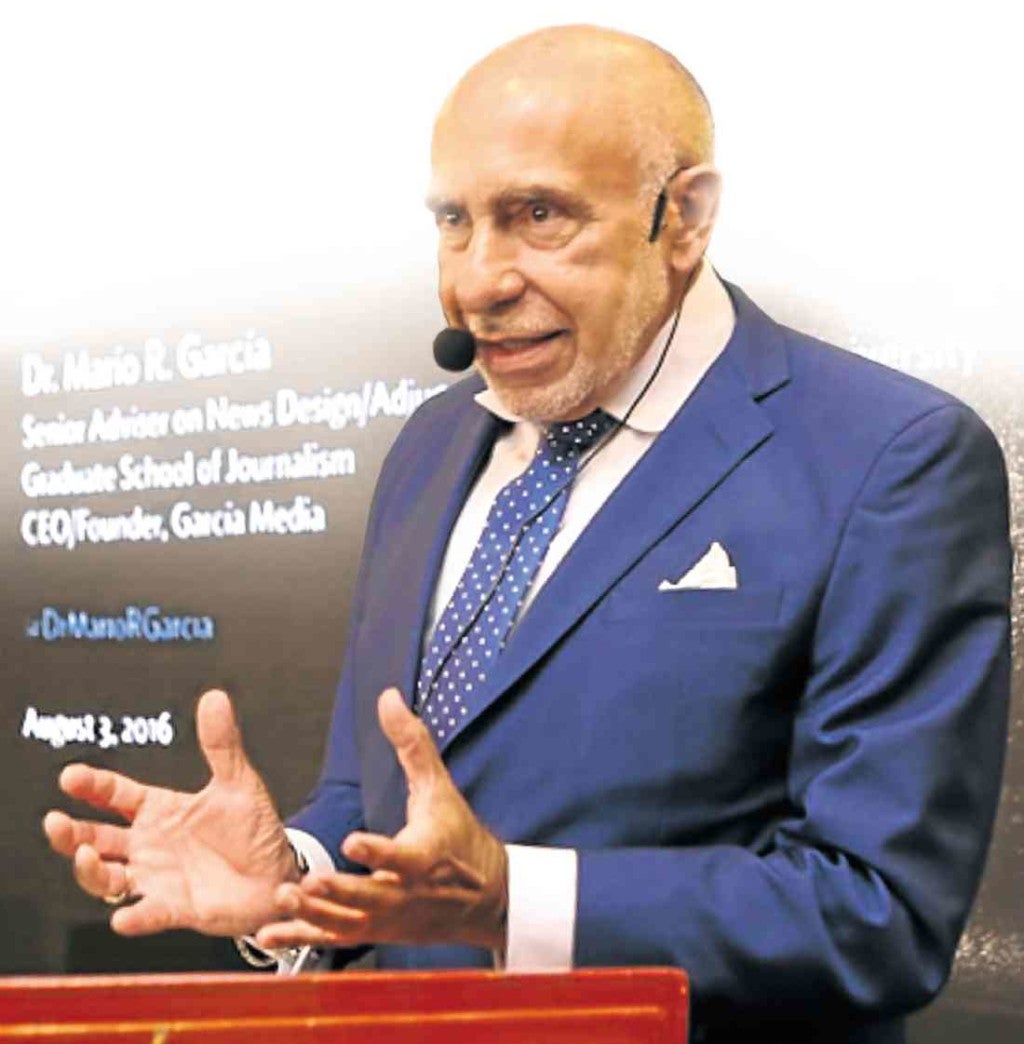 One of the world’s leading newspaper and magazine designers told a packed hall in the Manila Polo Club that changing “notions of frequency’’ in journalism have changed the idea of advertising time—and created new opportunities for advertisers.

Mario R. Garcia, founding CEO of Garcia Media and the man behind the redesign of some 700 titles in about 120 countries, encouraged an audience of advertising executives, brand leaders and marketing professionals to “think your ads across platforms.’’ Changes in the news media have created two basic “tempos’’ for consuming content and, therefore, advertising itself, he said. “Ask the question: What is the best platform for my ad at a certain time of day?’’

The answer depends on which platform—together, he calls them the media quintet—best meets the advertiser’s need at a given time of day. Research shows that “a user accesses, on the average, three platforms a day,” he said.

In Garcia’s view, the media quintet he is the leading exponent of consists of print, web, smartphone, tablet and wearable tech, such as the Apple Watch.

He was in the country last week to consult for the Inquirer Group. Among the newspapers and media organizations Garcia has redesigned are the Wall Street Journal and the Washington Post in the United States, Die Ziet in Germany, Aftenposten in Norway, El Tiempo in Colombia and the South China Morning Post in Hong Kong. The Inquirer-sponsored forum on Wednesday was billed as a learning session on “trends and realities” in advertising, in the light of ongoing disruptions in the media industry.

At the forum, Garcia presented what he called a shortened version of his 16-week Columbia School of Journalism course, offering a perspective on the changes disrupting the news industry. He also expanded on themes he discussed when he gave the Hearst Digital Media Lecture in Columbia in 2014.

He spoke of the “journalism of interruptions”—the steady stream of alerts, breaking news, posts, tweets and updates which now runs through the media system. “Today, we want the second-by-second update.” But he also acknowledged that longer-form journalism continues to be read or viewed. Hence, the two tempos.

He describes the two tempos using now-familiar language: There is a “lean-forward” mode to reading or viewing and there is a “lean-back” mode. The first is urgent, oriented to breaking news and other forms of interruption; the second is more leisurely and more open to long-form journalism.

In his Hearst Lecture, he offered the analogy of raw meat and cooked steak: “These two tempos fulfill the information needs of our audience. Every media house, no matter its size, needs to become aware of these two tempos and adapt them to how the news cycle flows in their newsrooms. It is raw meat for the constant flow of information, and the more cooked steak for lean-back platforms—think print and tablets.”

At the Manila forum, he drew out the implications for advertising. “Cooking at two levels all the time,” he said, means making “advertising messages present in the life of the information consumer at all times.”

He shared lessons from his work with clients using the so-called card system for digital media. Pride of place went to De Telegraaf of The Netherlands, which was among the first to use cards as the basic principle for organizing the page on both the web and on mobile. Cards allow greater ease of use for the reader or viewer, he said. At the same time, they enable advertising to become much more integrated into the reading or viewing experience.

Audiences like the seamlessness of the experience, he said.

Judging from the conversations in the hall and along the hallway after the forum, the highlight of the Manila forum may have been when Garcia presented the “modular advertising concept.” Modular is a way of organizing the printed page, which allows both the newspaper to “create their own sizing” and advertisers to enjoy a more attractive, less cluttered look. The modular approach would eventually do away with the bane of designers and layout artists, the so-called staircase way of placing print ads.

Garcia has been in the business for four decades, but he said he was not alone in his media consumption habits: He gets breaking news on his Apple Watch (where the Inquirer is present); he posts on Facebook; he writes a popular blog. “Don’t assume 70-year-olds aren’t on Snapchat,” he said, referring to the latest social media phenomenon.

But print remains “strong, here and now,” he said, both as a platform for journalism and for advertising. He spoke of what the print platform does best, summing it up with the catchphrase “serendipity and surprises.” For instance, “Sunday papers are their own package,” he said, emphasizing that weekend audiences were eminently the lean-back crowd eager to discover more to the week’s news. He also discussed the extraordinary impact of “wrap-around ads,” which “embrace the front page.”

He offered a summary of what all the changes in the news media industry meant for advertisers: The two tempos of the news cycle also dictate two tempos for advertising, and advertisers must learn to be present, in both “lean-forward and lean-back moments.” TVJ

Traditional journalism and the new media