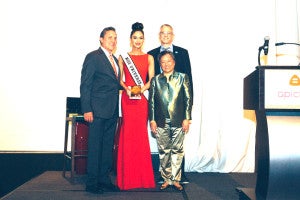 NEW YORK CITY — It all started with a four-minute interview.

In January, Consul General Mario De Leon of the Philippine Consulate in New York invited Therese Rodriguez, the chief executive officer of Apicha Community Health Center, and other Filipino community leaders to each have a private audience with the recently crowned Miss Universe Pia Alonzo Wurtzbach.

During the Q and A portion of the international beauty contest, Wurtzbach had stated, “If I were to be Miss Universe, I will use my voice to influence the youth and I would raise awareness to certain causes like HIV awareness that is timely and relevant to my country, which is the Philippines.”

Rodriguez took the opportunity during her interview with Wurtzbach to commend her for using her celebrity to show light on HIV-AIDS. She also gave her an update about encouraging biomedical developments in the U.S. in the fight against the disease and New York’s bold plan to end the epidemic by 2020.

At the end of their brief talk, Rodriguez invited Wurtzbach to get herself tested at Apicha, just as the Miss Universe from Japan did in 2003. Without hesitation, Wurtzbach said yes. 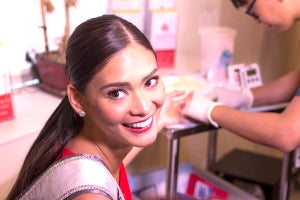 The beauty queen’s commitment to put a famous face on HIV-AIDS awareness came at an opportune time. While the Philippines’ current infection rate represents less than one percent of the country’s total population of 100 million, the Philippine Department of Health had issued alarming statistics last year.

The DOH reported that as of April last year, 24,936 Filipinos had tested positive for HIV but more than 20,000 of these cases were diagnosed during five years prior to the report, a dramatic spike in new infections.

Based on these figures, it has been estimated that the number of HIV/AIDS cases could go up to 133,000 in six years, which could spell a major health crisis in the Philippines and devastate its HIV/AIDS treatment resources. The United Nations has referred to the Philippines as “one of only a handful of countries at risk of a full-blown epidemic.”

Thirty-percent of the 682 cases reported in July 2015 were Filipinos aged between 15 and 24, underscoring the importance of Rodriguez and Wurtzbach’s call for HIV testing and increased education around the epidemic, especially among the youth.

But more than 30 years after the first HIV infection rate was first reported in the country in 1984, cultural, religious and political barriers continue to thwart efforts towards an aggressive public awareness campaign that has been proven effective in lessening infection rates.

Rodriguez related the experience of a former Apicha staff, who is now heading up an NGO doing HIV work in the Philippines. As part of his job, he tried to reach out to mayors and governors to get them on board to support their education campaign. To his dismay, a town official in a province, popular for its tourist attractions, responded, “Give me the pictures of those with HIV and I will plaster them all around the plaza!”

Currently, the primary mode of transmission in the country is through unprotected sexual contact and 70 percent of new infections recorded were among men having sex with men. Sex, especially gay sex, is a delicate subject that many Filipinos still feel hesitant to discuss openly because of the stigma both on gay relationships and HIV/AIDS.

While the AIDS Prevention and Control Act of 1998 mandates education and prevention initiatives, two legislations have weakened this law. Republic Act No. 8504 bans HIV testing of minors without parental consent, and Congress cut one billion pesos from the 2016 DOH contraceptives budget, barring poor Filipinos from access to reproductive health services that could protect them from sexually transmitted diseases and educate them on healthier family planning.

Furthermore, the implementation of the 2009 amendment to the Dangerous Drugs Act, which prosecutes drug users and anyone who distributes drug-related materials like syringes, effectively ending safe needle exchange programs in Cebu, where there is a high incidence of HIV cases due to needle sharing.

The Catholic Church has frowned upon the use of condoms, a proven method to avoid infections between sexual partners, but other religious groups have joined the HIV-AIDS awareness campaign because of the looming health crisis.

In the Los Angeles Times article of January 20, 2016 (“The Philippines largely dodged the AIDS crisis. That’s changing”), Bic Bic Chua, executive director of Catholics for Reproductive Health, criticized the decision of Philippine Congress to eliminate the budget for contraceptives and issued an alarm: “We are running a race against time – against increasing maternal deaths, increasing teen pregnancies and increasing HIV rates. Nobody wins. We will all lose.”

At its 26th anniversary gala dinner in May, billed as “A Thousand and One Champions,” Apicha honored Wurtzbach for her efforts to assist the community health center in its mission to serve New York’s underserved communities and her commitment to HIV-AIDS awareness.

On June 20, one week before the scheduled National HIV Testing Day, Wurtzbach took her public HIV testing at the clinic of Apicha in lower Manhattan, following a pre-testing counseling with one of the agency’s medical staff.

At the ensuing press conference, which was covered by Filipino media, Wurtzbach stated, “National HIV Testing Day is a reminder to get tested and take care of not only your health but your loved ones’ health too. It is important to know the facts and be proactive about protecting yourself, your partners and your community.” 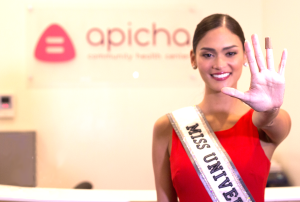 Rodriguez applauded her activism on this important public health issue. The CEO of Apicha stated, “I hope that her generous act of courage will inspire all societies, especially our beloved Philippines…to support her efforts to lend her hand in breaking the HIV stigma.”

Visits to Apicha’s website increased significantly after the TV airing of the press conference, and Filipino viewers posted comments, such as “Guys, let’s get ourselves tested.” “She did it, so can you!” “Yey, Queen P, you’re so brave!”

In a recent phone interview, Rodriguez reiterated the importance of HIV testing and being pro-active about treatment. “The sooner you learn about your status, the sooner you can be linked to care and introduced to necessary anti-retroviral therapy to suppress your HIV viral load and make you non-infectious. This can lead to better health, quality of life, and relationships. Knowledge of your status allows you to get control of your life.”

Rodriguez also noted, “For those who are negative for the virus and intend to become sexually active, pre-exposure prophylaxis (PrEp) is another option to prevent infection. Everyone must keep abreast of recent developments around HIV-AIDS to help you and your family stay safe and healthy.”

The collaboration between an international celebrity and a community health center CEO, forged in a meeting that lasted only a few minutes, showed what community partnerships could do to help fight HIV-AIDS.

The global reach of their message on social media has the potential to save lives and call attention to the state of public health in developing countries like the Philippines, where young people, the country’s hope for the future, are now at great risk for a highly preventable disease such as HIV-AIDS.