A Trump presidency and the consequences for Filipinos

On the 74th anniversary of the bombing of Pearl Harbor, Republican presidential nominee Donald J. Trump dropped what the London Daily Telegraph called a “bombshell” when he announced that if elected president of the United States, he would implement a “total and complete shutdown of Muslims entering the United States.”

Trump’s campaign manager at the time Corey Lewandowski explained that Trump’s proposed ban would apply to “everybody,” including Muslims seeking immigrant visas as well as tourists seeking to enter the country. The ban would even apply to American Muslims who are currently overseas – presumably including members of the military and diplomatic service, another Trump staffer added.

Trump’s proposed Muslim ban drew outrage from leaders in Asia who warned that Trump was helping the cause of ISIS by feeding Islamic State propaganda that depicted a grand war between Islam and the West.

“By uttering such a hate-spreading statement, Donald Trump has committed a crime by indirectly helping the cause of so-called global Islamist militants such as Islamic State,” the chairman of the Jamiatul Ulama Bangladesh, an Islamic scholars council, told the press.

But there was no outcry from Philippine officials or civil society that this bigoted policy would harm the 15 percent of the Philippine population that is Muslim. Were Filipino Christians willing to throw their Muslim brothers and sisters under the Trump bus?

Even the Filipino American community remained painfully silent on this issue. I confess that I too did not denounce Trump and his xenophobic bigotry in my columns published in the US and in the Philippines. I was content to just post my revulsion with Trump in my Facebook page.

In Indonesia, the world’s most populous Muslim nation, Zuhairi Misrawi, an Islamic scholar from Muslim organization Nahdlatul Ulama, said the call was “a step backwards” for America. “We previously regarded America as a role model for democracy, equality, peace and justice,” he said.

Trump’s proposed Muslim ban relies on a US law that grants the president the authority to issue executive orders to prevent the entry of any class of people who would be considered “detrimental to the interests of the United States.”

Detrimental to the interests of the United States? Sen. Lindsey Graham (R-South Carolina) pointed out that Trump’s comments are “hurting the war effort and putting our diplomats and soldiers serving in the Middle East at risk. The way to win this war is to reach to the vast majority of people in Islamic faith who reject ISIS and provide them the capability to resist this ideology.” 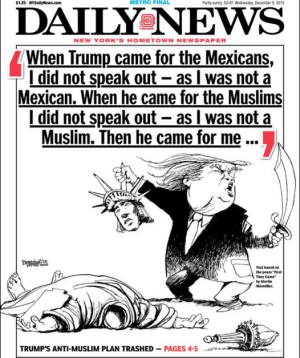 Perhaps in response to severe criticism from fellow Republicans about his religious intolerance, Trump modified his position so it would not expressly ban Muslims simply because of their faith. In his acceptance speech on July 21, Trump announced that he would now ban immigration from countries “compromised by terrorism.”

Without mentioning the word “Muslim,” Trump said: “We must immediately suspend immigration from any nation that has been compromised by terrorism until such time as proven vetting mechanisms have been put in place,” Trump said. “We don’t want them in our country.”

When pressed by Meet the Press TV host Chuck Todd about whether his ban on immigration from countries “compromised by terrorism” would include countries like France and Belgium which have suffered terrorist attacks in recent years, Trump declined to answer. Instead, he replied, “It’s their own fault, because they’ve allowed people over years to come into their territory.”

Guess which country in Southeast Asia has been most “compromised by terrorism”?

Aside from Indonesia, with its Jamiyah Islamiyah militants, the Philippines would also be high on the list with its own homegrown terrorists, Abu Sayyaf, which is based in Sulu and Basilan in Mindanao. The Abus have waged a brutal campaign of bombings, kidnappings and assassinations, killing Filipinos and foreign nationals since their founding in 1991, as an offshoot of the Moro National Liberation Front. In 2004, they claimed responsibility for the bombing of Superferry 14 killing 116 people.

In 2014, the Abu Sayyaf, led by its leader, Isnilon Totoni Hapilon, pledged its loyalty to Abu Bakr al-Baghdadi, the leader of ISIS. Since then, it has been kidnapping foreigners for ransom and mercilessly beheading them if its demands are not met.

So if Trump is elected president, Philippine tourists may be barred from entering the US even for those with US relatives who are diehard Republicans who voted for Trump. Filipinos don’t even have to be Muslim to be barred from entry as long as the Philippines is deemed a country “compromised by terrorism.”  The rest of the Philippines would now be included along with the 15 percent Muslim that would be thrown under the Trump bus. United at last.

As Trump would say, “It’s their fault, they’ve allowed (Muslims) over the years to come into their territory.” Of course, Muslims have lived in the Philippines since before the Spaniards came. In fact, Manila was a Muslim settlement under Rajah Soliman (Suleyman) when the Spaniards invaded it in 1565.

We can’t ignore it now, can we? 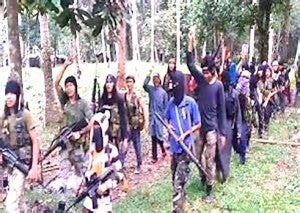 There is another Trump campaign promise that would also dramatically affect Filipinos. Trump has vowed to deport an estimated 11.3 million “illegal immigrants” in the US.  Many believe the actual number to be much higher, at least 15 million. Although the emphasis in the media has focused mostly on Latinos who crossed the border from Mexico, the list includes probably 500,000 Filipinos, those affectionately called TNTs (“tago nang tago” – always hiding).

Experts posit that it would take 20 years to remove “illegals” or “undocumented” aliens from the US, an estimate provided by the American Action Forum (AAF), a conservative think tank that released a 2015 study that showed that it would require 650 busloads every month for two decades. The total cost of a 20-year mass deportation program would be about $600 billion.

The AAF Report also conservatively estimated that “illegals” make up about 6.4 percent of the US labor force – about 11 million in 2014. Deporting them would shrink the US economy by nearly 6 percent or $1.6 trillion by 2035.

Many of the TNTs who would be deported by a President Trump have lived in the US for more than 20 years, are working in low-paying jobs, and regularly remit money to their relatives in the Philippines.

Filipino American voters in the November elections in the US should realize the political consequences of their vote.

Read Next
Delays, cancellations at Dubai airport after crash-landing
EDITORS' PICK
Water remains our saving grace right now
Navotas will be on lockdown from July 16 to 29 – Tiangco
World-standard accounting: Unlocking your financial potential
Defend Your Health! Shop health essentials from home with Rose Pharmacy’s Online Sale
COVID-19 wards in 2 more hospitals reach full capacity
Chatting with companions, answering calls on MRT 3 trains banned
MOST READ
‘I am not my father,’ says daughter of lawmaker who voted to deny ABS-CBN franchise
In slap on face of PH, China replies to Locsin on tribunal ruling: It’s invalid
Vilma Santos-Recto ‘prepared’ to face ‘consequences’ over ABS-CBN franchise vote
Did a meme get on Agot Isidro’s nerves? She’s asking ’24 Oras’ to fact-check it
Don't miss out on the latest news and information.