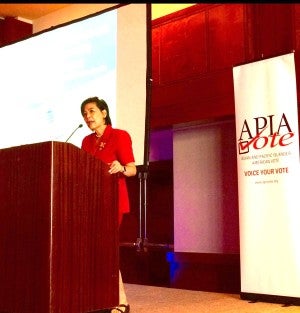 PHILADELPHIA, Pennsylvania — As Asian American elected officials and community leaders take the stage here at the Democratic National Convention, the formidable presence of Asian American voters in the nation’s electoral process can no longer be ignored.

“We have dramatically increased our voting registration across the country,” U.S. Representative Judy Chu of California said yesterday afternoon, July25, at a gathering of AAPI leaders and Democratic delegates.

“In Nevada, Virginia and even Pennsylvania, we are the swing votes,” Chu added.

Measured by the growing Asian electorate — which is projected to double from almost 6 million in 2016 to 12.2 million in 2040 — and the increasing number of Asian American congressional candidates, Asian voters can now shape and influence the elections, according to the Asian American Pacific and Islander (AAPI) Vote.

The fastest growing ethnic group in the United States for nearly two decades, the Asian population is now reaching about 17 million, the latest data says, and is contributing about $1.1 trillion to the American economy.

“We are no longer at the table for the menu; we are a significant part of the electorate,” said U.S. Representative Michael Honda. “There will be more [Asian] faces, I promise, that you’ll see on the political scene.”

Sayo Bhojwani, founder and president of the New American Leaders Project, a movement that trains and inspires immigrant leaders of all racial and ethnic backgrounds to run for office, says that the more first and second-generation Asian Americans will be in the ballot, the more it will strengthen the community and make the government better responsive to achieve a robust democracy. 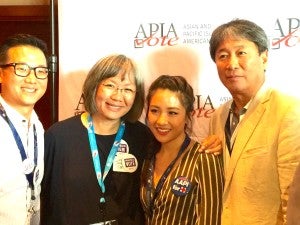 Actress Constance Wu (second from right) of “Fresh Off the Boat” at the Democratic National Convention in Philadelphia. ANTHONY ADVINCULA

“I encourage you [Asian Americans] to run for office,” Bhojwani added, “and I want you to look at what the electoral environment would be in 2020, 2024 and beyond. That’s the only way we’re going to change the conversation.”

With the effects of exclusionary rhetoric in this year’s election campaigns, the survey indicated that Asian American registered voters, including Independents, will not vote for candidates with anti-immigrant and anti-Muslim views.

Celebrity Constance Wu, the young Chinese American actress playing the lead role in ABC Television Network’s “Fresh Off the Boat,” also showed her support for Clinton and the Democratic Party, pushing Asian voters to be counted in November elections.

“It’s very important for us, for young Asian Americans to go out and vote, especially in these complex situations,” Wu said. “I’m saying this even though I’m not a political person.”

Mee Moua, president and executive director of Asian Americans Advancing Justice, says that it is a crucial time for Asian American voters to be recognized, heard and acknowledged.

“Anybody who ignores our community,” Moua said, “does it at their own peril.”