Wider and wider circles of outrage 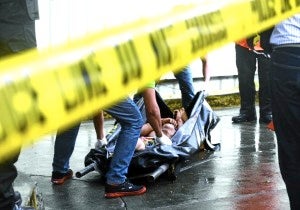 MANILA—The bodies are piling up. And no one seems to care.

A grieving and distraught young woman holds the lifeless body of her partner, slain by vigilantes because the dead man was alleged, according to a note left behind, to be a drug pusher. Published on the front page of this newspaper a few days ago, it’s quite evident from the photograph, with its powerful and moving Pieta-like composition that the couple belonged to the masa, with no protection that is afforded members of the privileged class.

Who will raise a stink on the dead man’s behalf? Who will mourn for those killed who have been similarly judged guilty without due process? Who will ensure that the police respect civil rights? Certainly not this presidential administration, whose insistent call to rid society of the drug menace by any means necessary has led to such blatant disregard for human life.

Plain and simply these rubouts, more akin to gangland slayings, are extrajudicial killings, or in Marcos-era jargon, salvagings. And there has been, since Duterte took over as president, a virtual epidemic of these murders (let us call them for what they are), a majority by policemen, whose accounts have been, surprise, surprise, entirely self-serving. No witnesses to counter the glib narratives they offer to the public, the most common rationales being, resisting arrest, or attempting to escape, or trying to grab the gun of the arresting cop.

What is equally disturbing is that a large segment of the public buys these formulaic stories—the same public that usually cast doubts on the honesty and professionalism of these very same enforcers of the law. Suddenly they have become paragons of integrity, heroic and unselfish. What magic! What a miracle!

The other slayings have been by vigilantes, who could be anyone, whether these are those who held grudges against the slain, are rival drug ring operatives, or crusaders who feel empowered to take the law into their hands and administer frontier-style justice to individuals suspected to be part of the drug problem.

The operative word here is “suspected.” In other words, no hard evidence was offered, no judicial verdicts handed in, to prove that the victim was indeed guilty. Isn’t the presumption afforded all people, and the very basis of a society guided by the rule of law is, innocent until proven guilty? Yet, that very presumption has been turned on its head: guilty at first blush. With the judicial process being sidestepped, why not simply abolish the courts?

I said it an earlier column and I’ll say it again: The so-called war on drugs is really a war on the poor, and the disenfranchised. Most of the 500 salvaged (and counting) in what activists are calling “cardboard justice”—after the cardboard signs declaring the slain person a drug pusher— have been from the margins of society, those without the wherewithal to live securely in gated communities, or condominiums or comfortable apartment buildings. Tellingly, when the police attempted to enter villages in Metro Manila in their search for those suspected of drug pushing, the villages refused them entry, rightfully so. These middle- to upper-class enclaves had the legal knowhow and the political clout to see that due process and their residents’ civil rights were respected.

These attempts to short circuit the legal process should serve as a wake-up call not just for those living in these gated communities but for everyone. For now, disappointingly, there have been few cries of outrage. People who will theoretically defend human rights at the drop of a hat, have kept quiet and thus by their very silence condone these killings. The mindset seems to be, if it isn’t happening to me or to those I know, then why bother? Fewer misfits hanging out on the streets—good!

It is a mindset that will come back to haunt us as the circles of outrage grow wider and wider.