US, Japan, Australia step in for weak Asean to chide China 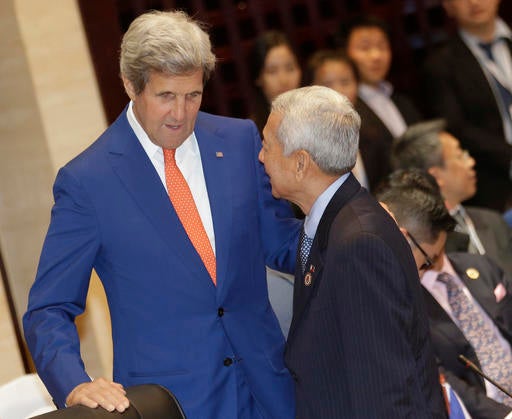 VIENTIANE, Laos— The United States, Japan and Australia have urged China not to construct military outposts and reclaim land in the disputed South China Sea, in a strong show of support for Southeast Asian nations that have territorial disputes with Beijing in the resource-rich area.

A joint statement by the three allies, issued late Monday, ironically fills the vacuum created by Southeast Asia’s main grouping, which during its meeting of foreign ministers on Sunday failed to take a stand against China because of disunity among themselves.

“The ministers expressed their serious concerns over maritime disputes in the South China Sea. The ministers voiced their strong opposition to any coercive unilateral actions that could alter the status quo and increase tensions,” said the statement issued by Secretary of State John Kerry and foreign ministers Fumio Kishida and Julie Bishop.

The three met in Vientiane on the sidelines of a series of meetings organized by the Association of Southeast Asian Nations, or Asean. The grouping could have leveraged the recent decision by a permanent arbitration panel in The Hague, which ruled in favor of the Philippines in a case it brought against China in their dispute in the South China Sea.

The panel ruled that China’s claim that amounts to claiming almost all of South China Sea was illegal. Implicit in the ruling is that China has no standing in its other disputes with Malaysia, Brunei and Vietnam, which also are Asean members.

But Asean became divided because of China’s divide-and-rule diplomacy by winning support from Cambodia, and to some extent Laos, which resulted in the grouping issuing a joint statement on South China Sea that did not mention China by name or the arbitration ruling.

Instead, it fell upon Asean allies to rush to their support.

In their joint statement, the ministers of Japan, Australia and the United States also expressed “strong support” for the rule of law and called on China and the Philippines to abide by the arbitration panel’s award, “which is final and legally binding on both parties.”

“The ministers stressed that this is a crucial opportunity for the region to uphold the existing rules-based international order and to show respect for international law,” they said in one of the strongest and most detailed post-arbitration warnings by the allies against China.

In a clear broadside at China, the statement urged all parties to refrain from “unilateral actions that cause permanent physical change to the marine environment … and from such actions as large-scale land reclamation, and the construction of outposts as well as the use of those outposts for military purposes.”

China has been rapidly developing reefs and rocky outcrops into islands in the South China Sea, including building air strips capable of landing military aircraft. It claims historic rights to the vast sea, a claim that was rubbished by the arbitration panel, which said the sea is international waters and the rocky outcrops do not constitute sovereign islands that would give states an ownership on the surrounding waters.

For years China has prevented fishermen from other countries from venturing into the areas it claims, and has made it clear it will not back down despite the arbitration award, which it calls politically motivated, illegal and irrelevant. It has accused countries outside the region — notably the United States, Japan and Australia — of meddling in Southeast Asia and destabilizing the region.

In recent days, China’s military has staged live-firing exercises in the area and said it would begin regular aerial patrols over the sea. It also has asserted that it will not be deterred from continuing construction of its man-made islands.