Vietnam warns South China Sea is a ‘test’ of Asean 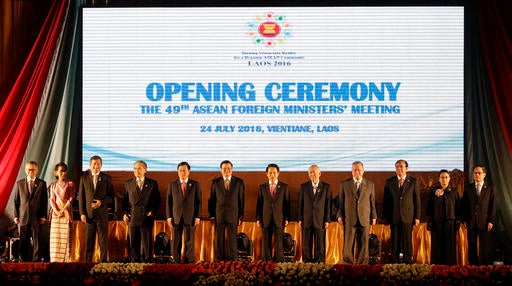 VIENTIANE, Laos—Vietnam has warned that the inability of Southeast Asian nations to forge a unified front against Beijing’s militarization of the South China Sea is a “test” of the regional bloc in the face of its greatest security challenge.

The unusually strong comments from a key claimant to the contested waters, comes as diplomats meet in Laos for the first summit since a UN-backed tribunal debunked Beijing’s legal claim to vast stretches of the strategically vital sea.

After talks stuttered on Sunday, Vietnam’s Ministry of Foreign Affairs issued a late night statement warning that the South China Sea had become “a test case for the unity and the central role of Asean.”

“Many ministers stressed that in this context, Asean should promote solidarity, unity and a central role,” the statement added.

Diplomats met for a new round of crunch talks called for by Laos on Monday morning.

As they came to a close, Indonesia’s foreign minister Retno Marsudi expressed optimism that a statement would be agreed, though diplomats previously told Agence France-Presse it would likely be “watered down”.

Staunch Beijing ally Cambodia has been accused of scuppering efforts by the bloc to issue a joint statement calling on Beijing to adhere to the UN tribunal’s decision.

Four Asean members — Vietnam, the Philippines, Malaysia and Brunei — have competing claims with Beijing over parts of the South China Sea.

Most members of the bloc want to keep pressure on China over its campaign of island building in the strategic waters.

But Asean operates on a tradition of consensus diplomacy, meaning a single nation can have an effective veto power if it disagrees with the others.

China has been accused of teasing poorer members like Laos and Cambodia into fracturing regional unity with promises of aid and trade.

A failure to respond to the tribunal ruling or the region’s key security issue will do little to counter those claims.

The ongoing impasse in Vientiane has led to fears of a repeat of a 2012 summit in Cambodia where the bloc failed to issue a joint communique for the first time in its history because of disagreements over the South China Sea.

Chinese pressure was blamed last month for a startling show of discord by the bloc, when countries swiftly disowned a joint statement released by Malaysia after an Asean-China meeting.

That statement had expressed alarm over Beijing’s activities in the South China Sea. Cambodia and Laos were later fingered as being behind moves to block the joint statement./rga