Barred Korean got threats via text before killing self at NAIA 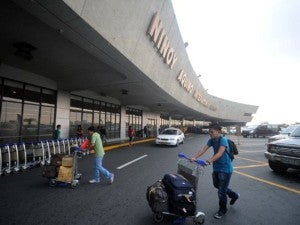 MANILA — A South Korean national facing deportation received death threats on his phone minutes before he was found dead in an apparent suicide inside a toilet at Ninoy Aquino International Airport (NAIA) on Thursday night, the Philippine Daily Inquirer learned.

The Bureau of Immigration (BI) office at NAIA said 50-year-old Sang Kwan An was wanted in his home country in connection with a $700,000 investment scam, based on information received from Interpol.

BI Port Operations chief Red Mariñas said An arrived at NAIA on a flight from Taipei around 3 a.m. on Thursday and was supposed to be put on a plane going back to his port of origin at 5 p.m.

But the Korean Embassy asked that he remain in detention at the airport so it could serve a warrant of deportation against him. “They wanted him deported so he could go straight to Seoul and face the fraud charges filed against him,” Mariñas told the Philippine Daily Inquirer on Friday.

Some employees at NAIA Terminal 3 overheard the Korean saying that he would be a dead man upon his return to South Korea. This was after he received a series of text messages in his phone while at the exclusion room.

According to a report from Manila International Airport Authority, a lifeless An was found seated on the floor of the toilet at the exclusion room, with a bag strap noosed around his neck and tied to a door hook, around 7:30 p.m. on Thursday.

He said his office has been more concerned with how the Korean was able to take an earlier flight from NAIA despite the Interpol alert against him.

Mariñas, who took over the BI post weeks ago, said An was cleared for departure from Terminal 3 on July 19 and it was only when he returned to the same terminal in the wee hours of Thursday that his status as a fugitive was seen on the database of blacklisted persons.

An had a Filipino wife in Davao City.  SFM