Chinese with 4.5 kilos of shabu arrested at Mactan-Cebu airport 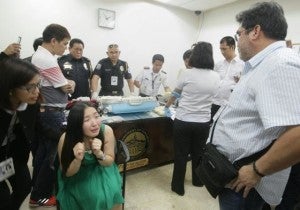 Chinese national Liming Zhou is in tears following her arrest at the Mactan Cebu International Airport (MCIA) on Wednesday morning after 4.5 kilos of shabu worth P6 million was found inside her luggage. (Photo by Tonee Despojo, INQUIRER VISAYAS)

LAPU-LAPU CITY, Cebu — A Chinese woman was arrested by the Customs police at the Mactan Cebu International Airport shortly before noon on Wednesday after she was allegedly caught bringing in four kilos of shabu (methamphetamine hydrochloride).

Liming Zhou, 27, was brought inside the Customs Office at the MCIA where she was to undergo interrogation.

She arrived at 11:30 a.m. from Xiamen, China, through Hong Kong on board a Cathay Pacific flight with one light blue trolley bag.

While passengers were lining up at the X-ray machine at the arrival area, Olibert Estillore, K-9 officer of the Philippine Drug Enforcement Agency, noticed Zhou looking so uneasy and kept going to the toilet.

When it was her turn at the X-ray, machine operator Haron Paragona of the Bureau of Customs, detected several packs inside her light blue trolley bag.

Zhou was asked to step aside as Customs personnel  Ronor Alinsug and Albert Barliso inspected her bag and found several dresses inside.

Alinsug and Barliso, however, noticed that there was a glossy plywood that served as a compartment in her luggage.

Zhou looked pale when the two officers found several packs of what appeared to be shabu after destroying the compartment. The two K-9 dogs immediately sat after sniffing on the packs, indicating that these contained illegal drugs. 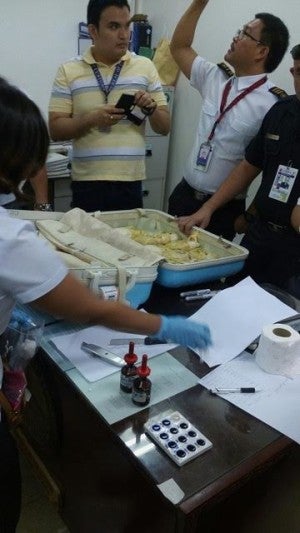 The woman burst into tears and was shaking when told that she had to be detained for bringing in illegal drugs into the country.

When the contents were tested, the Customs examiners found that the white powdery substance was methamphetamine hydrochloride or shabu.

The packs of shabu weighed 4.51 kilos which the PDEA estimated to be worth P6 million.

Jay Oyao, MCIA Customs officer-in-charge, said they were waiting for an interpreter to determine Zhou’s background and her contact in Cebu because the  woman could only speak Mandarin.

But based on her passport, he said Zhou had been to the Philippines thrice.  SFM