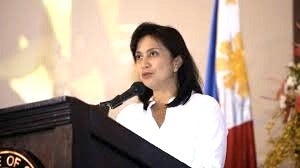 WASHINGTON, D.C. — Philippine Vice President Leni Robredo has agreed to speak at a national gathering of Filipino Americans next month near Philadelphia, Pennsylvania.

Following an early evening reception in her honor, Robredo will be the featured speaker at the gala dinner during the National Federation of Filipino American Associations’ (NaFFAA) 12th National Empowerment Conference on August 6 in Valley Forge, Pennsylvania, a city 25 miles north of Philadelphia.

“We are extremely delighted and honored that the vice president is coming to our conference,” says Loida Nicolas Lewis, national chair Emeritus and one of NaFFAA’s founders.

“In addition to her position of national leadership, her well-known advocacy on behalf of women and the country’s poor makes her presence deeply meaningful and significant,” Lewis adds. “As an organization dedicated to civic engagement and community empowerment, NaFFAA can certainly relate to the worthy causes she has passionately championed.”

Robredo was recently appointed by President Rodrigo Duterte to head the Housing and Urban Development Coordinating Council (HUDCC). She said she welcomed her new role because housing was one of the major concerns of her late husband, former Interior & Local Governments Secretary Jessie Robredo. He was killed in a plane crash in 2012.

The vice president said the Cabinet post would allow her to tackle problems that have deprived marginalized sectors of society from enjoying a better quality of life.

“We are, of course, excited that the second highest official of the Republic of the Philippines is joining us,” says Conference Chair Aida Rivera.

“There has already been a surge of interest and attendance. It’s not too late to register and participate in the various plenary sessions and workshops as well as listen to other prominent speakers. Please visit our website for more details,” Rivera adds.

The venue for this year’s National Empowerment Conference is the Valley Forge Casino Resort on 1160 1st Avenue, King of Prussia, PA 19406. (For more information, go to http://www.empowermentphilly.com/)

U.S. Rep. Bobby Scott (Dem) of Virginia, the first American with Filipino ancestry to serve as a voting member of Congress, will give the opening keynote address Friday morning, August 5.

Scott represents the state’s third district, which includes the cities of Hampton, Newport News, Norfolk and Richmond where large Filipino populations are located.

A strong advocate of Filipino American issues, Scott was among the first to sign on as co-sponsor of HR 2737, the Filipino Veterans Congressional Gold Medal Act of 2015. He has consistently supported legislation over the years providing benefits to Filipino World War II veterans, including repeal of the 1946 Rescission Acts.

Recognition of the Filipino and American soldiers for their wartime service to the Philippines and the United States will be the main focus during a panel on “Filipinos in the Military.”

Maj. Gen. Antonio Taguba (Ret), Chairman of the Filipino Veterans Recognition and Education Project (FilVetREP) will make the case for why the 260,000 soldiers who fought under the USAFEE deserve the country’s highest civilian award.

“Now that the Senate has approved this measure, we must urge House members to follow the Senate lead and pass this legislation while some of our veterans are still alive,” Taguba says. “But we need Filipino Americans across the country to reach out to their representatives and demand action in the next two months. If we fail, we’ll have to start all over again next year and that is not an option.”

The Filipino veterans’ 72-year fight for equity and justice has been NaFFAA’s major advocacy initiative since its founding in 1997.

More than a dozen workshops will focus on capacity building, financial literacy, professional development, cultural identity, political participation through Fil-Am Vote, physical and mental health, music and the arts, and an inter-generational dialogue.

A highlight of the conference is a special awards program honoring the legacy of Alex Esclamado, NaFFAA’s founding chairman and lifelong advocate of Filipino American unity and empowerment.

The Alex Esclamado Memorial Award for Community Service, which was conceived by NaFFAA and GMA International, was first conferred in August 2014 at the 11th National Empowerment Conference in San Diego, CA.

Brad Baldia, NaFFAA Pennsylvania State Chair and NEC co-chair points out that this conference is important because “it brings together the entire community on issues that matter, notably professional and leadership development of the next generation and community participation in our country’s political process.

Top Fil-Ams in all fields will be coming together to celebrate achievements in our community and engage in conversations about opportunities for effective collaboration.”

Formed in 1997 in Washington, D.C., NaFFAA mission is to actively promote civic engagement and community empowerment among the nearly four million Filipinos in the U.S. today.

Read Next
Waraynon non-profit in US offers talents for a cause
EDITORS' PICK
Egg prices rise due to bird flu, increased holiday demand | #INQToday
House energy committee chair Arroyo bats for cheap electricity
18,529 out of 24,903 pass nursing board exam
The vivo Y16 makes the season of giving more thoughtful for the whole family
The Best Tech Gifts For The 2022 Holidays
Marcos urges Filipinos to be like Bonifacio: honest, patriotic
MOST READ
Mel Tiangco on co-anchor Mike Enriquez’s condition, ‘rivalry’ with Korina Sanchez
LOOK: Vina Morales goes to Boracay with mystery man
Marcos urges Filipinos to be like Bonifacio: honest, patriotic
Ref admits to cheating: How Manny Pacquiao snagged the win
Don't miss out on the latest news and information.