Ramos to meet with Duterte to air ‘concerns’ on envoy appointment 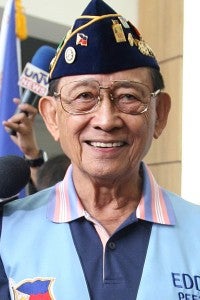 MANILA — Will he or won’t he? When asked on Tuesday if he would accept President Duterte’s offer for him to act as special envoy to China to lead bilateral talks, former President Fidel V. Ramos said it was still up for discussion.

“I have asked for an appointment to call on the President at his most convenient time, wherever he is I will go and I’m telling the same thing that I’m telling you,” Ramos told the media, at the sidelines of the launching and signing for his new book “For a Better Philippines-World.”

Ramos did not give media a clear “Yes” or “No” when asked if he would accept Duterte offer, but instead, a rundown of some “concerns” and “commitments.”

“Number one, I have a health problem and I must be near a doctor who knows my case,” said Ramos, who had also mentioned in television interviews that he would accept the job as special envoy if he received medical clearance from his doctors.

“Secondly, I am…finishing my commitments to the people called millennials,” Ramos quipped. “So that was my concern.”

“Eh special envoy mission, kaya ko, pero syempre magtatanong muna ako dun sa mga may control sa buhay ko, kasi meron akong obligasyon kay Mrs. Ramos, yun mga limang anak ko at saka yung walong apo ko.  Kasi, lahat yan e dahil sila ay parte ng buhay ko. Meron din akong project sa kanila at sila meron ding project sa akin  (I can handle the job of a special envoy but I have to ask what people who have control and have a stake in my life, think about it, because I have an obligation to Mrs. [Ming] Ramos, to my five children and to my eight grandchildren.  It’s because they’re part of my life.  I have a project for them and they have a project for me),” Ramos said.

Nevertheless, Ramos said he has thanked the President for the offer, and has said it was “an honor.”  SFM