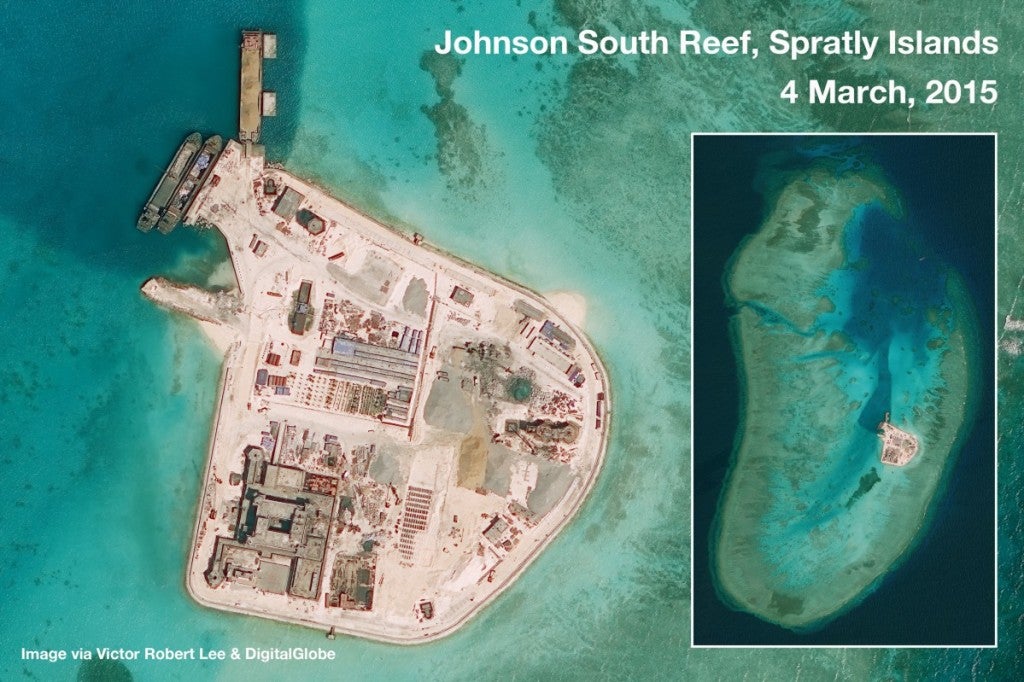 Defying international law, Beijing said it would not stop construction on the artificial islands it build in the South China Sea. IMAGE VIA VICTOR ROBERT LEE / DIGITALGLOBE

BEIJING, China — Beijing will “never” stop building in the South China Sea prematurely, a top military official has vowed, despite an international ruling that its actions were illegal.

The pushback came as China launched war games in waters in the strategically vital region, where diplomatic tensions are high.

“We will never stop our construction on the Nansha Islands halfway,” Wu Shengli, the commander of the People’s Liberation Army Navy, told US counterpart Admiral John Richardson, according to the official Xinhua news agency.

Nansha is China’s name for the Spratlys, where Beijing has rapidly turned reefs into artificial islands with facilities capable of military use, including extensive runways.

The reef system has multiple claimants in the region.

“The Nansha Islands are China’s inherent territory, and our necessary construction on the islands is reasonable, justified and lawful,” Wu added.

The Permanent Court of Arbitration (PCA) in The Hague last week ruled that there was no legal basis for Beijing’s claims to much of the South China Sea, embodied in a “nine-dash line” that dates from 1940s maps and stretches close to other countries’ coasts.

Its extensive decision also said that China’s construction on Mischief Reef had “violated the Philippines’ sovereign rights with respect to its exclusive economic zone and continental shelf”.

Manila — which lodged the suit against Beijing — welcomed the decision but China dismissed it as a “piece of waste paper”.

Wu said Beijing would not be intimated over the issue, adding: “Any attempt to force China to give in through flexing military muscles will only have the opposite effect.”

Despite Chinese objections, the European Union weighed in on the subject at a regional summit last weekend, with President Donald Tusk telling reporters the bloc “will continue to speak out in support of upholding international law”, adding that it had “full confidence” in the PCA and its decisions.

China pressured countries in the ASEAN bloc of Southeast Asian nations not to issue a joint statement on the ruling, diplomats said.

The US, Japan and Australia, amongst others, have urged Beijing to fall into line and respect the tribunal’s ruling.

An area off the east coast of China’s island province of Hainan will host military exercises from Tuesday to Thursday, China’s maritime administration said on its website, adding that entrance was “prohibited”.

The area of sea identified is some distance from the Paracel islands and even further from the Spratlys.

A combat air patrol was mounted over the sea recently and these would become a regular practice in future, an air force spokesman said separately.

Bombers, fighters and other aircraft were sent to patrol islands and reefs including Huangyan Dao — the Chinese name for Scarborough Shoal — spokesman Shen Jinke was quoted by the official Xinhua news agency as saying.

Scarborough Shoal is disputed with the Philippines and is seen as a particular flashpoint.

In a separate message on its website, the maritime administration said last week that four out of five lighthouses built atop islands and reefs in the sea have been activated, and a fifth would be put into use soon.