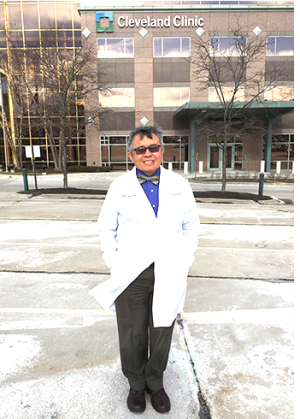 The University of Santo Tomas has always had a place in my heart, and not because of any surgery, though it’s a good thing its top graduates are doctors. When my dad would get the Philippine newspapers in San Francisco, for some reason, I found myself rooting for UST’s basketball teams.

Hence, when I found out Dr. Toribio Flores, an ear, nose and throat guy at the Cleveland Clinic was a UST’er, well that was good. And he was proud of what his organization of UST doctors have done to keep the pipeline strong.

“We’ve raised $5 million and given it away,” he boasted, presumably for scholarships and medical assistance.

Doc Flores’ heart is in the right place. His politics?

Well, he’s going to the Republican Convention in Cleveland.

But I know most of America is.

We’ve arrived at the point many of us have been dreading. The GOP is all set to be re-branded Trump’s Old Party, the TOP.

So why does it feel like American democracy has hit rock bottom?

By the time we get to this point in an election year, we all should be soaring with the hopes and aspirations of the triumphant leader of our respective parties.

Remember “hope and change?” OK, that wasn’t exactly 100 percent successful. But we are a lot better off now than we were in 2008. Back then we were bankrupted by war and in the middle of a massive financial disaster.

This year, however, our leaders seem so flawed — instead of flying high, we’re all mired knee deep in the dung of our choice.

I’ve covered politics and been to a few conventions since the 1980s, and while the idea of “holding your nose” while voting is not a new concept, there is a sense that in this cycle, we find ourselves close to asphyxiating more than ever before.

“In a development not seen in any modern presidential contest, more than half of all voters hold unfavorable views of the two major party candidates and large majorities say neither is honest nor trustworthy,” the Times continued. “Only half of voters say Mrs. Clinton is prepared to be president, while an astonishing two-thirds say that Mr. Trump is not ready for the job–including four in 10 Republicans.”

This is not exactly what one would call a ringing endorsement for either of our major political standard bearers.

What’s a believer in our American system supposed to do?

Maybe we all need one of those disposable foam padded nose clips this year.

That’s when I knew I had to call Dr. Flores, my ear, nose and throat acquaintance at the Cleveland Clinic.

Flores, 65, a leader in the Filipino American community in the Cleveland area–and a mad rhumba dancer–wishes he could be as passionate on the convention floor as he can be on the dance floor.

But his attitude reflects the polls. This is not the year for political passion unless your passion coincides with Trump’s vanity.

“I really don’t like him,” said Flores, who during the primary season backed his home state’s leader, John Kasich.

For Flores, Trump was near the bottom of the pack. That wasn’t to be the case for the rest of GOP voters, and now even the establishment is falling into line, and so is Flores, reluctantly.

“He’s not an ideal candidate,” said Flores about the man he is voting for, who then explained his hesitancy. “I don’t think he’s a conservative. He’s acting conservative because he wants the Republican nomination.”

So why not vote for Hillary Clinton?

As if Trump in his own myriad of misstatements is a paragon of trust.

But again, as the polls suggest, the outcome of the email scandal has hurt Hillary. And Asian American Republicans like Flores can’t seem to find a way to forgive her.

“It bothers me the FBI and the attorney general won’t prosecute,” said Flores. I think the electorate will treat her harshly for what she’s done.”

And that’s the mental calculation among many Republicans these days. Trump’s not great, but he’s no Hillary.

Funny how Democrats are saying just the opposite.

Still, it’s strange to hear someone like Flores, a standard immigrant success story, voting for Trump. The Times/CBS poll also showed Hillary as the one who overwhelmingly scored highest on doing a better job with race relations–60 percent to Trump, 29 percent.

But maybe that depends on how much money you have, or if you even care.

Flores calls himself a fiscal conservative and a good Catholic who is strong on religious values. His success in America defines his political profile. He’s for low taxes and a small, efficient government that is rid of waste and inefficiency.

It’s the political value system of an immigrant who came with nothing, and thinks you can make it too, if you work hard.

Flores came to America during the Marcos dictatorship as a Philippine-trained doctor. He took all the tests he needed to qualify to practice here and started out doing medicine in the little towns of Pennsylvania. America has been his land of opportunity.

And if you doubt his compassion, he’ll say he’s ready to provide care and even perform surgery for free to all who are truly in need.

When he arrived in the U.S., Flores said he was actually a die-hard fan of the American Camelot story, the Kennedys. Over time, he’s shifted his views. But he’s still managed to preserve a fairy tale. Flores honestly believes he’s seen little discrimination in America. So little, in fact, that for him, race doesn’t even come into play in the election.

And Trump is his man?

As we wait for Trump and his veep pick, Indiana Gov. Mike Pence, to speak at the convention, the previews have not been great.

On CBS’ “60 Minutes,” Pence looked like a hand-puppet, able to speak when Trump would let him. And when he did, Pence prefaced everything with “Donald Trump…this good man…” as if he was trying to convince himself.

Trump was no better. When asked about being humble, the only answer he could come up with was a very un-humble, “I think I’m much more humble than you would understand.”

Of course, he has to be the best, most humblest person around.

But is he the best for the presidency?

Maybe it depends on the size of your nose-clip?

Emil Guillermo is a journalist and commentator based in Northern California. Contact him at http:///www.amok.com