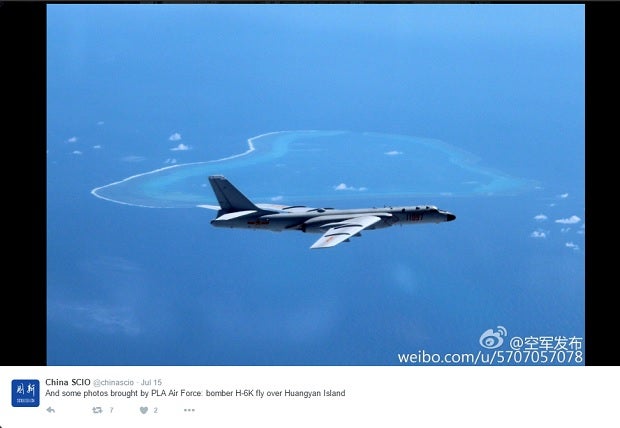 China flew its nuclear-capable bomber over the Scarborough Shoal a few days after the arbitration court issued its decision on the South China Sea dispute last week.

The China’s State Council Information Office posted on Twitter last Friday the photos of the bomber, the H-6K, flying over the contested shoal.

The photo release comes after the much-awaited ruling in The Hague, Netherlands last week. The tribunal said that China’s nine-dash claims had no legal basis.

The website military-today.com described the Chinese nuclear bomber as a “strategic bomber” and “capable of attacking US carrier battle groups and priority targets in Asia.”

Last April, the US deployed its A-10 Thunderbird attack planes over the Scarborough Shoal for maritime patrols as part of its contribution to the region’s stability in the international waters and airspace. RAM/rga