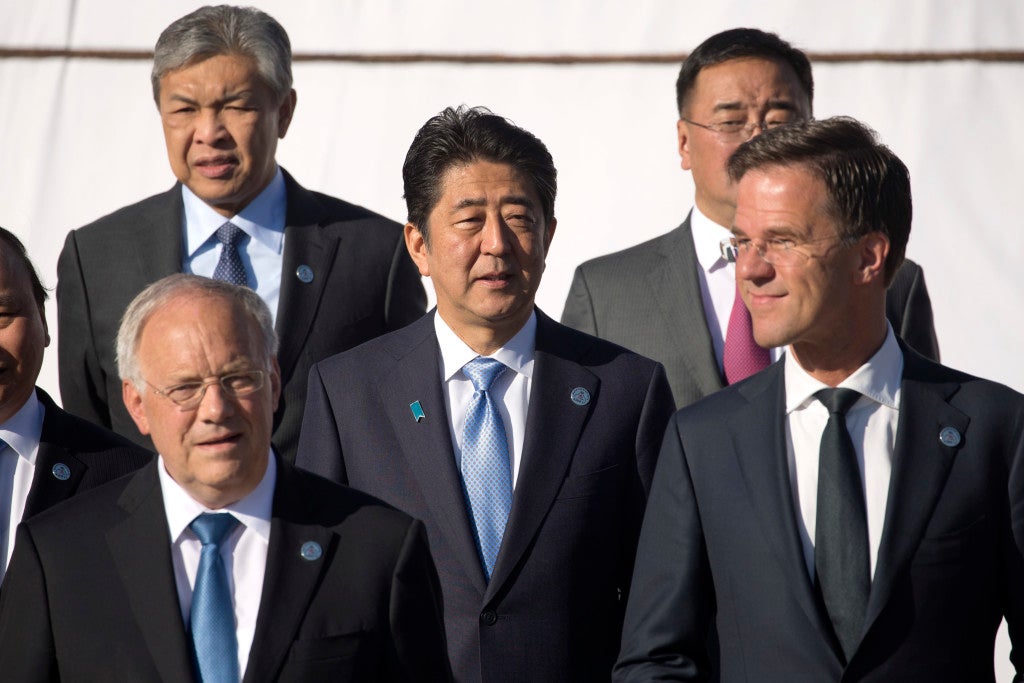 Japan and China ended up in a diplomatic draw with regard to the wording of the chairman’s statement at the Asia-Europe Meeting (Asem), held until Saturday in the Mongolian capital of Ulaanbaatar.

The meeting was the first summit-level international gathering since a court of arbitration issued a ruling that rejected China’s sovereignty claims over the South China Sea.

During the meeting, Japan led the movement to form international efforts to restrain China, while the Chinese side made a strong attempt to prevent such actions.

In a discussion at the summit on Saturday morning, Japan’s Prime Minister Shinzo Abe urged China to accept the court’s ruling on the South China Sea issue, saying, “The rule of law is a universal principle that the international community must firmly maintain.”

Several other leaders mentioned the ruling. A senior government official said: “Discussions during the meeting were satisfactory. We were successful in putting restraint [on China].”

On Friday, Abe held meetings with Vietnamese Prime Minister Nguyen Xuan Phuc and Philippine Foreign Secretary Perfecto Yasay, who confirmed their stance on respecting the ruling. Abe made clear that he backs those countries who confront China over the South China Sea.

Abe held talks on Saturday with Cambodian Prime Minister Hun Sen, who is well known for his pro-China stance, stressing, “[the ruling] is legally binding.”

Abe held a bilateral talk on Friday with his Chinese counterpart, Li Keqiang. During the meeting, Abe was straightforward on the South China Sea issue.

According to sources accompanying Abe, Li glared at Abe with a displeased expression and repeated the same territorial claims as before. Meanwhile, as if he were competing against Abe, Li held bilateral meetings with leaders from more than 10 countries in an effort to deter heightening pressure on China.

Russia and Cambodia were also said to have expressed their support or respect for China on the matter.

During its bilateral discussion with Cambodia, China promised a total of 3.6 billion yuan (US$448 million app.) in aid over the next three years. China is believed to continue to use economic assistance as a tool to gain some Southeast Asian countries’ support.

Placing importance on trade and other relations with China, not a few countries stay ambiguous on their stance toward China.

In the end, the Asem chairman’s statement failed to clearly mention the South China Sea, although it included language on the importance of resolving disputes in line with the principles of international law.

To some extent, both Japan and China were unsatisfied with the wording of the statement.

Abe intends to persistently demand that China comply with international law at venues such as international conferences. At the same time, he keeps a careful eye on preventing confrontation over the South China Sea from harming economic relations. At the meeting of the Japanese and Chinese prime ministers on Friday, they affirmed cooperation in the fields of counterterrorism and the economy.

The Japanese government is attempting to hold a bilateral meeting between Abe and Chinese President Xi Jinping on the sidelines of the G-20 summit meeting in Hangzhou, China, in September. A Japan-China-South Korea summit is to be held in Japan by the end of this year as scheduled.

A senior official at the Foreign Ministry said: “On one hand, we draw a clear line on the issues of East and South China Seas to distinguish where we do not compromise. On the other hand, we keep doors open for dialogue and avoid further deterioration of relations.”

Some expect China to keep a restrained manner and show readiness for dialogue at least until September, when they host the G-20 meeting. Yet a diplomatic source in Beijing denied that view, saying: “There is no possibility China will compromise over territorial issues.”/rga

China: ‘No reason’ to delve into sea dispute at ASEM Summit