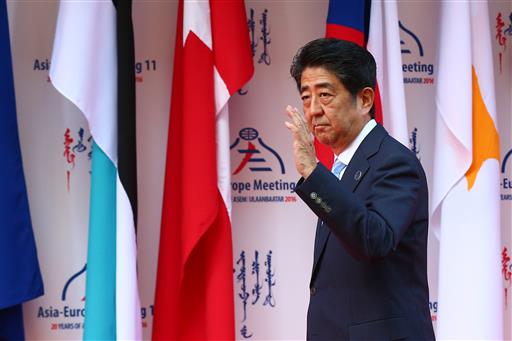 ULAN BATOR, Mongolia—Tokyo raised pressure on Beijing at an Asia-Europe summit Saturday to respect an international tribunal’s ruling that dismissed its claims to much of the South China Sea.

At a retreat outside the Mongolian capital Ulan Bator, Prime Minister Shinzo Abe told the assembled leaders that the rule of law was “a universal principle that the international community must firmly maintain,” according to Japan’s Jiji Press.

“I strongly hope the parties to the dispute comply with the award and lead to a peaceful solution of the dispute in South China Sea,” he said.

The ruling by the Permanent Court of Arbitration in The Hague on Tuesday invalidated Beijing’s claims to much of the South China Sea, which are embodied in a “nine-dash line” that dates from 1940s maps and stretches close to other countries’ coasts.

The decision has proved a boon to Tokyo, which is embroiled in a separate territorial dispute of its own with Beijing and vies with it for influence across Asia.

Beijing boycotted the PCA hearings, saying the court had no jurisdiction, and has vowed to ignore the ruling.

It also said the subject should not be brought up at the Asia-Europe Meeting (ASEM) in the Mongolian capital.

But Abe’s comments on Saturday followed a blitz of meetings with leaders and foreign ministers from around the region on the summit sidelines as he sought to build consensus on the issue, including discussions Friday with Vietnamese Prime Minister Nguyen Xuan Phuc and Philippine Foreign Secretary Perfecto Yasay.

Both countries have competing claims with Beijing in the strategically vital South China Sea, where tensions have mounted over the Asian giant’s construction of artificial islands capable of supporting military operations and its claims on the region’s marine resources.

Manila, which brought the case, has promised not to “taunt or flaunt” the verdict.

But Japanese foreign ministry spokesman Yasuhisa Kawamura told Agence France-Presse that in his meeting with Abe, Yasay agreed to “closely cooperate” at upcoming Asean-related conferences to ensure that the “parties to the dispute comply with the final award of the tribunal”.

In his meeting with Phuc, the two leaders agreed that the tribunal’s award should be observed, and Abe offered to increase cooperation on building Vietnam’s maritime law enforcement capabilities, Kawamura said.

Kawamura described the exchange as “frank and candid” and Chinese state media accounts described the Chinese leader telling Abe that Japan should “stop hyping up and interfering” in the dispute.

Beijing had hoped to use the ASEM summit — official theme “Partnership for the Future through Connectivity” — as an opportunity to showcase its global initiatives, such as the One Belt, One Road program, an ambitious plan to build infrastructure projects across the Eurasian region.

China has sought to assert its claims in the South China Sea by building a network of artificial islands capable of supporting military operations, and this week reiterated its right to declare an Air Defense Identification Zone in the area, which would demand civilian flights submit to the authority of its military.

Despite Chinese objections, the EU also weighed in on the subject, with President Donald Tusk telling an opening ceremony Friday that “dialogue and a strong commitment to the rules-based international order are necessary.”