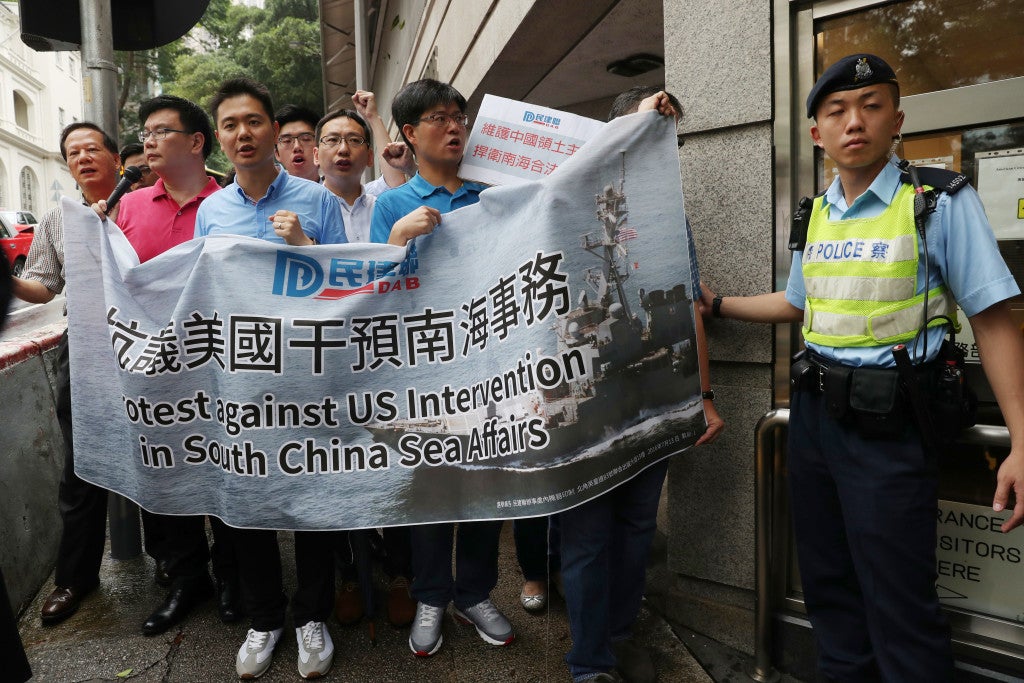 Pro-Beijing protesters shout slogans against the United States supporting an international court ruling of the South China Sea outside the U.S. Consulate in Hong Kong, Thursday, July. 14, 2016. China warned other countries Wednesday against threatening its security in the South China Sea after an international tribunal handed the Philippines a victory by saying Beijing had no legal basis for its expansive claims there. (AP Photo/Kin Cheung)

The Philippines plans to call for world support at a meeting of Southeast Asian nations and the European Union in compelling China to respect an international tribunal’s ruling that rejected Chinese claims to most of the South China Sea, escalating a dispute that has raised the prospect of conflict.

President Duterte is skipping the 11th Asia-Europe Meeting (Asem), but he has sent Foreign Secretary Perfecto Yasay to represent him at the summit, which opens today in Ulaanbaatar, Mongolia.

A statement from the Department of Foreign Affairs (DFA) said on Thursday that Yasay would discuss “within the context of Asem’s agenda” the Philippines’ peaceful approach to resolving its maritime dispute with China and “the need for parties to respect” the ruling by the UN-backed Permanent Court of Arbitration in The Hague in favor of the Philippines.

The arbitral tribunal ruled on Tuesday that China had no historic right to almost all of the South China Sea and that it had violated Manila’s sovereign rights to its own exclusive economic zone (EEZ) by preventing it from exploring for oil and Filipino fishermen from fishing in those waters locally known as West Philippine Sea.

China, which claims 90 percent of the South China Sea, including waters close to the shores of the Philippines and other claimants—Brunei, Malaysia, Vietnam and Taiwan—rejected the ruling, saying on Wednesday that it would take all necessary measures to protect its “territorial and maritime rights and interests” in the waterway.

On Thursday, China threatened a “decisive response” to any provocations in the South China Sea after the ruling.

“If anyone wants to take any provocative action against China’s security interests based on the award, China will make a decisive response,” said Chinese foreign ministry spokesperson Lu Kang.

In an interview on Wednesday, Yasay said he was confident that the international community would support the ruling.

“We already have the full support of the members of the international community and we hope Asean (Association of Southeast Asian Nations) will come up with a unified statement,” Yasay said.

But regional diplomats said on Thursday that the 10-member Asean would not issue a statement on the ruling, blaming the no-comment on pressure by China.

“Asean officials had prepared a draft text, but there was no agreement to release a joint statement,” a Southeast Asian diplomat said, adding that China was believed to have leaned on its Asean allies Laos and Cambodia to prevent a statement in the highly charged affair.

“Some Asean countries are definitely not happy. Beijing’s action can be seen as interference in Asean’s centrality,” the diplomat said.

Another senior Southeast Asian diplomat said China had “succeeded in splitting Asean through its allies on the South China Sea issue,” referring to Laos and Cambodia.

Even just raising the issue at the Asem summit will anger China, which has long bristled at Philippine efforts to have the dispute discussed at multilateral events.

Chinese pressure was blamed last month for a startling diplomatic U-turn by Asean, which swiftly disowned a joint statement released by Malaysia after an Asean-China meeting in Beijing.

That statement had expressed alarm over Beijing’s activities in the South China Sea.

The fiasco highlighted the bloc’s inability to maintain a united front on the issue.

While the Philippines and Vietnam have been particularly critical of China, Laos and Cambodia are generally regarded as preferring to side with their giant neighbor and benefactor.

Asked on Thursday about the lack of an Asean statement on the arbitral court’s ruling, DFA spokesperson Charles Jose said: “Kindly direct your query to the chair, Laos, because it is the one consolidating views and positions, being the chair.”

Cambodia had said before Tuesday’s ruling that it would not back any Asean comment, effectively ruling out a statement since the bloc doesn’t speak without full consensus.

Asean has in recent years released joint statements expressing increasing alarm over island-building in the South China Sea, while taking care not to single out China.

But those days may be over, given the issue’s potential to divide Asean, according to former Philippine UN representative Lauro Baja.

“We should no longer expect in the future that there will be an Asean statement on China,” Baja said.

The Philippines initially refrained from asking China to abide by the arbitral tribunal’s ruling, following President Duterte’s directive to achieve a “soft landing” with the country’s much more powerful neighbor.

Budget Secretary Benjamin Diokno said on Thursday the President was confident the Philippines would be able to negotiate better with China after the arbitral tribunal’s ruling.

Diokno attended the Cabinet meeting that Mr. Duterte called on Tuesday after the tribunal handed down its ruling.

“Let’s be magnanimous in victory. That’s what he said,” Diokno said when asked about Mr. Duterte’s comment about the ruling.

Last night, speaking at a dinner held in his honor by San Beda Alumni Association, Mr. Duterte said he would ask former President Fidel Ramos to go to China to start talks with Beijing.

Manila hardened its stance on Thursday, with the DFA statement detailing Yasay’s priorities at the Asem summit.

Yasay will have support from Japanese Prime Minister Shinzo Abe, who said as he left for Mongolia on Thursday that he wanted to discuss the South China Sea disputes at the summit.

Asem is a gathering of leaders from Asia and the European Union for the strengthening of cooperation between the two regions. The summit is held every two years.

The Philippines is a founding member of Asem, and has actively participated in the Asia-Europe dialogue since its establishment in 1996. With reports from Marlon Ramos and AFP