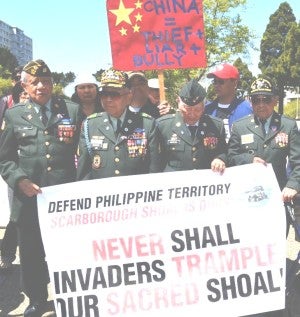 Filipino World War II veterans protesting in front of the Chinese consulate in San Francisco in May 2012. The US Senate voted to give Filipino veterans the Congressional Gold Medal July 13. The House must vote on an accompanying bill. The Filipino veterans in the photo are (L-R): Simplicio Yoma, Reggie Nacua, Bernardo Izorena and Leonardo Torres. RODEL RODIS

LOS ANGELES—After a wait of 70 years, Filipino and Filipino-American soldiers who fought with US forces during World War II finally got the recognition they deserve.

The US Senate on Wednesday (Thursday in Manila) unanimously approved a bill to award the Congressional gold medal, the highest congressional honor, to Filipino veterans who fought for the United States during WWII as Philippine Scouts, members of the Philippine Commonwealth Army and recognized guerillas.

Sen. Mazie K. Hirono (D-Hawaii), who authored the Filipino Veterans of World War II Congressional Gold Medal Act of 2015, said the honor recognizes the Filipino soldiers for their “brave and courageous service” to the United States.

A bipartisan coalition of 72 senators cosponsored the legislation that Hirono introduced in June last year.

“[The Filipino veterans’] fight didn’t end with the war,” Hirono said. “For decades, they continued to fight for the benefits they have earned and to be reunited with their families in the United States.”

Out of the 260,000 Filipino veterans to be honored with the Congressional Gold Medal, only about 15,000 are living.

One of them, 85-year-old Rudy Panaglima, expressed joy and relief at the senate approval of the bill.

“My comrades and I have been waiting for more than 70 years, so I am delighted that we will finally be recognized,” said Panaglima of Arlington, Virginia.

Although Filipino veterans were promised equal treatment as American veterans after WWII,  the US Congress in 1946 enacted the Rescission Act that stripped away full recognition and benefits from them.

In 2009, Congress approved a stimulus package that included one-time payments of $15,000 to Filipino veterans in the United States and $9,000 to those living in the Philippines.

However, thousands of veterans’ claims were denied, mainly because US authorities did not accept records from the Philippines.

Retired Maj. Gen. Antonio Taguba, chair of the Filipino Veterans Recognition and Education Project (FilVetREP), called on the US House of Representatives to follow the Senate’s lead and “finally make this long-awaited recognition a reality for our soldiers who performed their duty with honor and uncommon valor.”

Sen. Harry Reid (D-Nevada) said the US government “can never fully repay the debt we owe these brave soldiers,” but that Congress can pay tribute to their courage by awarding them the Congressional gold medal.

“Granting Filipino veterans this honor will be yet another step taken in correcting past wrongs and celebrating their heroic actions and the patriotism of their community,” Reid said.

“While some are no longer with us, I am proud this legislation will finally ensure they receive proper recognition for their valiant acts of military service,” said Sen. Dean Heller (R-Nevada).