US pulled the strings behind PH, Chinese observers say 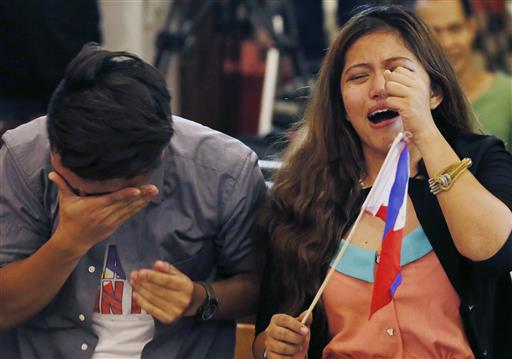 Filipinos react to the Hague-based U.N. international arbitration tribunal’s ruling favoring the Philippines in its case against China on the dispute in South China Sea Tuesday, July 12, 2016 in Manila, Philippines. The international tribunal has found that there is no legal basis for China’s “nine-dash line” claiming rights to much of the South China Sea. The tribunal issued its ruling Tuesday in The Hague in response to an arbitration case brought by the Philippines against China. AP PHOTO

BEIJING – The United States was behind the Philippines, trying to stir up matters in the South China Sea in order to block China and thus improve its regional military and diplomatic presence, experts said.

They made the remark as the tribunal in The Hague issued its ruling on Tuesday in the arbitration case unilaterally initiated by the former Philippine government.

The administration of former Philippine president Benigno Aquino III was used as a pawn by the US to aid its Asia-Pacific rebalancing strategy, they said.

Tao Wenzhao, a researcher of US studies at the Chinese Academy of Social Sciences, said the arbitration was not solely the business of the Philippines.

“We can see that Washington, which never ratified the United Nations Convention on the Law of the Sea, encouraged and supported Manila to initiate the arbitration case from the very beginning,” Tao said, adding that top lawyers Manila hired were US citizens.

Myron Nordquist, associate director of the Center for Oceans Law and Policy at the University of Virginia School of Law, said: “Now the Filipinos are having such fun making faces at China, hiding behind the US military, thinking they are really doing something wonderful.

“If the US ever became a party to this agreement, we would have opted out, as the Chinese did.” In fact, the US established the precedent of “nonparticipation and nonacceptance” of a ruling by a third party to settle an international dispute in the Nicaragua case of the 1980s.

Recently, seven US warships have been patrolling the South China Sea, including the aircraft carrier Ronald Reagan as well as three destroyers sailing close to Chinese reefs and islands. Oskar Krejci, director of the Institute of Global Studies at the University of Jan Amos Komensky Prague, said what the US is doing in the region is not acting as someone trying to restore balance would act.

Instead, it acts as a purveyor of “a military presence strategy, and therefore is making an effort to maintain US hegemony in the region”, Krejci said.

If the situation in the South China Sea intensifies, the US will have more excuses to increase its military deployment in the Asia-Pacific, an important part of its rebalancing policy, Tao said.