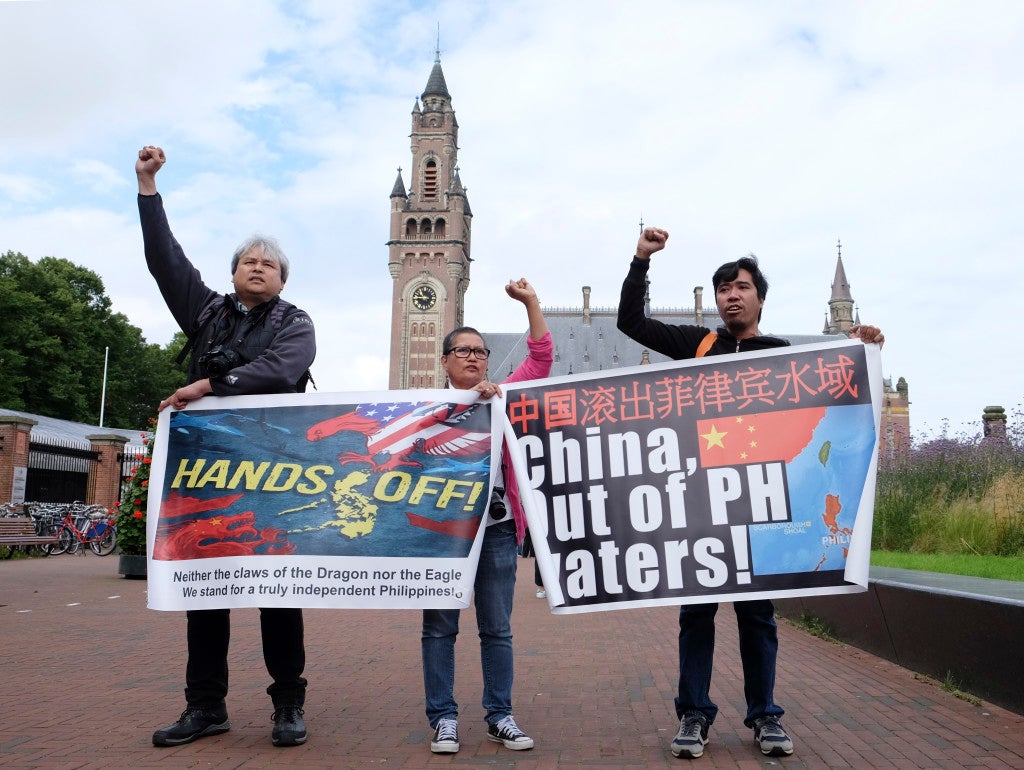 Protesters stand outside the Peace Palace in The Hague, Netherlands, on Tuesday, July 12, 2016, ahead of a ruling by the Permanent Court of Arbitration (PCA) on the dispute between China and the Philippines over the South China Sea. China has intensified the drumbeat of its opposition to an international tribunal’s ruling expected Tuesday that could threaten its expansive claims in the South China Sea. AP PHOTO

WASHINGTON—The United States put itself on a collision course with great power rival China on Tuesday, describing a ruling against Beijing’s South China Sea claims as “final and legally binding.”

Washington had carefully avoided taking a stance on the suit lodged by the Philippines against China’s maritime territorial claims, but when judgment came down, it urged both sides to abide by the result.

“The United States expresses its hope and expectation that both parties will comply with their obligations,” State Department spokesman John Kirby said. Beijing has already rejected the ruling out of hand.

Earlier, a UN-backed tribunal in The Hague — the Permanent Court of Arbitration — ruled that China has no historic rights to resources within the sea areas falling within the so-called “nine-dash-line”.

The United States has no claims of its own within this three-million-square-kilometer (1.2-million-square-mile) patch of sea, but has asserted the right of all shipping to pass through areas it regards as international waters.

And Washington is an ally of the Southeast Asian countries which do dispute China’s claim, including the Philippines, which lodged the international suit.

“The decision today by the tribunal in the Philippines-China arbitration is an important contribution to the shared goal of a peaceful resolution to disputes in the South China Sea,” Kirby said.

US officials are “studying the decision and have no comment on the merits of the case,” he added, but nevertheless asserted the right of the tribunal to make its ruling and said it should be respected.

“The United States strongly supports the rule of law. We support efforts to resolve territorial and maritime disputes in the South China Sea peacefully, including through arbitration,” he said.

“As provided in the Convention, the tribunal’s decision is final and legally binding on both China and the Philippines,” he added, urging all claimants “to avoid provocative statements or actions.”

But Beijing had already reacted furiously, saying it “neither accepts nor recognizes” the ruling.