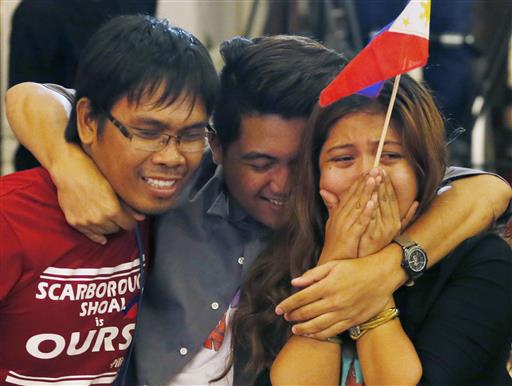 Filipinos celebrate the Hague-based U.N. international arbitration tribunal’s ruling favoring the Philippines in its case against China on the dispute on South China Sea Tuesday, July 12, 2016 in the financial district of Makati city, east of Manila, Philippines. AP

An arbitration panel in The Hague, Netherlands, issued a ruling Tuesday in a long-running dispute between the Philippines and China over the South China Sea. The Philippines had asked the tribunal to declare China’s claims and actions invalid under the U.N. Convention on the Law of the Sea. Beijing has refused to join the case, rejecting the tribunal’s jurisdiction, and has said it will not accept the decision.

A look at how the dispute has unfolded:

1947: China demarcates its South China Sea territorial claims with a U-shaped line made up of eleven dashes on a map, covering most of the area. The Communist Party, which took over in 1949, removed the Gulf of Tonkin portion in 1953, erasing two of the dashes to make it a nine-dash line.

1994: The 1982 U.N. Convention on the Law of the Sea, under which the Philippines has taken China to arbitration, goes into effect after 60 countries ratify it. The agreement defines territorial waters, continental shelves and exclusive economic zones. The Philippines joined the convention in 1984, and China in 1996. The U.S. has never ratified it.

1995: China takes control of disputed Mischief Reef, constructing octagonal huts on stilts that Chinese officials say will serve as shelters for fishermen. The Philippines lodges a protest through the Association of Southeast Asian Nations.

1997: Philippine naval ships prevent Chinese boats from approaching Scarborough Shoal, eliciting a protest from China. The uninhabited reef, known as Huangyan Island in China, is 230 kilometers (145 miles) off the Philippines and about 1,000 kilometers (600 miles) from China. In ensuing years, the Philippines detains Chinese fishermen numerous times for alleged illegal fishing in the area.

2009: China submits its nine-dash line map to the United Nations, stating it “has indisputable sovereignty over the islands in the South China Sea and the adjacent waters.” The submission came in response to applications by Vietnam and Malaysia for recognition of extended continental shelves, which would give them resource rights. The Philippines, Vietnam, Malaysia and Indonesia protest the Chinese claim.

2011: The Philippines files a diplomatic protest after a chartered ship searching for oil and gas and in Reed Bank near the Spratly Islands complained of being harassed by two Chinese patrol boats, forcing it to change course.

2012: China takes effective control of Scarborough Shoal after a tense standoff between Chinese coast guard ships and a Philippine naval vessel that had stopped a Chinese fishing boat to inspect it.

2013: The Philippines brings its dispute with China to the Permanent Court of Arbitration in The Hague, angering Beijing. A five-member panel of international legal experts is appointed in June to hear the case.

2014: The Philippine government summons China’s top envoy in Manila in February to protest what it said was the firing of a water cannon by a Chinese government vessel to drive away Filipino fishermen from Scarborough Shoal. China ignores the protest and calls its sovereignty there “indisputable.”

China issues a position paper in December arguing that the panel does not have jurisdiction over the case, because it concerns issues of sovereignty and boundary definition, which are not covered by the U.N. convention, and that the Philippines and China had agreed to settle their dispute only through negotiation.

2015: The arbitration panel in The Hague rules in October that it has jurisdiction over at least seven of the 15 claims raised by the Philippines. A hearing on the merits of the claims is held in November. China does not participate.

July 12, 2016: The Permanent Court of Arbitration rules that China has no legal basis for claiming much of the South China Sea and had aggravated the regional dispute with its land reclamation and construction of artificial islands that destroyed coral reefs and the natural condition of the disputed areas. The Philippines, which sought the arbitration ruling, welcomed the decision, and China rejected it outright. TVJ

Read Next
Senators hail PH’s arbitration victory vs China
EDITORS' PICK
Leveling up your ‘lutong bahay’ with the kitchen companion you never knew you needed
LIST: What to expect in areas under GCQ, MGCQ
Notice of 2020 regular meeting of stockholders June 18, 2020
PNP to maintain checkpoints during GCQ to ensure compliance to health protocols
DOTr bares 2 phases of public transport revival in GCQ areas
SM prepares for ‘safe malling’
MOST READ
LIST: What to expect in areas under GCQ, MGCQ
DOH explains: Only 109 of record-high 539 COVID-19 patients were ‘fresh cases’
Duterte approves Metro Manila’s shift to GCQ starting June 1
Bocaue Mayor Joni Villanueva passes away, Sen. Villanueva confirms
Don't miss out on the latest news and information.