FDI net inflows at record high of $2.2B in April - BSP | Global News

FDI net inflows at record high of $2.2B in April – BSP 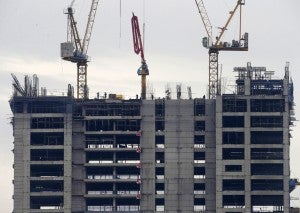 Data showed net FDI inflows last April surged from $364 million a month ago and $382 million a year ago, which BSP said was “reflective of the favorable investment climate as the economy continued to post strong growth and show even better growth potentials.”

The Philippine economy grew by a better-than-expected 6.9 percent in the first quarter, with full-year growth expected to be within a “conservative” 6-7 percent, a range still better than most forecasts for its Asean neighbors.

The average economic growth of 6.2 percent in the first five years of the previous Aquino administration was also the fastest since the late 1970s, such that Aquino’s economic managers had declared that the Philippines was no longer Asia’s sick man, but now a rising star in the region.

In a statement, the BSP said net inflows were posted across all FDI components at the start of the second quarter.

According to the BSP, the bulk of the net inflows in April was made of debt instruments—overseas-based parent firms’ lending to their affiliates in the country in order to finance existing operations as well as expansion, which hit $1.3 billion, up 371.6 percent year-on-year.

The top sources of equity capital placements last April were Germany, Japan, the Netherlands, Taiwan and the United States.

The industries that received the most amount of FDI that month included administrative and support service activities, financial and insurance, manufacturing, real estate, as well as wholesale and retail trade.

At the end of the first four months, net inflows of FDI climbed 183.6 percent year-on-year to almost $3.5 billion.

“In particular, non-residents’ investments in debt instruments [as of end-April] more than doubled to $1.9 billion from $687 million last year. Net equity capital placements also grew by 372.6 percent to $1.3 billion from $279 million. This was due mainly to the $1.4-billion gross equity capital placements, which is four times the previous year’s level of $369 million,” the BSP explained.

The top five sources of equity capital placements during the January to April period were Hong Kong, Japan, Singapore, Spain and the US, from where investments were poured mostly into the accommodation and food service, construction, financial and insurance, manufacturing as well as real estate sectors.