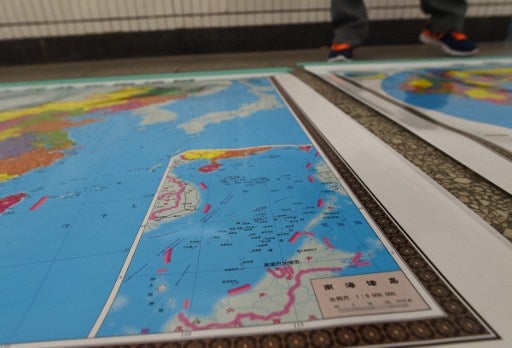 In this photo taken on June 15, 2016 a vendor stands behind a map of China including an insert with red dotted lines showing China’s claimed territory in the South China Sea, in Beijing.
Chinese pressure was blamed June 16 for a stunning diplomatic U-turn by Southeast Asian Nations that saw them retract a statement sounding alarm over Beijing’s island building in the South China Sea. China claims nearly all of the South China Sea — a vast tract of water through which a huge chunk of global shipping passes. The Philippines, Taiwan, Brunei, Malaysia and Vietnam have competing claims to parts of the sea, which is believed to harbour significant oil and gas deposits. / AFP PHOTO / GREG BAKER

A LANDMARK ruling on an arbitration case filed by the Philippines that seeks to strike down China’s expansive territorial claims in the South China Sea will be a test for international law and world powers.

China, which demands one-on-one talks to resolve the disputes, has boycotted the case and vowed to ignore the verdict, which will be handed down tomorrow by the United Nations Permanent Court of Arbitration in The Hague.

Some questions and answers about the case:

Q: What’s the case about?

A: After years of diplomatic negotiations ended nowhere, the Philippines brought its dispute with China to international arbitration in January 2013, despite Beijing’s warnings of a diplomatic and economic backlash.

China wants to negotiate directly with the Philippines and each of the four other claimants in an arrangement that would give it leverage for its sheer size and influence.

Beijing has steadfastly opposed bringing the disputes to an international arena, which could provide the United States a chance to intervene.

The Philippines asked a UN tribunal of five arbitrators to declare invalid China’s vast claims, known as nine-dash line for the dashes that demarcate virtually all of the South China Sea as Chinese territory, under the United Nations Convention on the Law of the Seas, or Unclos.

China and the Philippines are among more than 160 signatories of the 1982 convention, regarded as the constitution that governs and stipulates the rights of countries in using the world’s oceans.

With China’s sprawling claims, the Philippines stands to lose a huge chunk of off-shore territory, said Supreme Court Associate Justice Antonio Carpio, who has made extensive studies on the conflicts.

“This Chinese aggression is the gravest external threat to the Philippines since World War II,” he said.

The Philippines also asked the tribunal to classify whether a number of disputed areas are islands, low-tide coral outcrops or submerged banks to determine the stretch of territorial waters they are entitled to under the convention. It also wants China to be declared in violation of the convention for carrying out fishing and construction activities that breached the Philippines’ maritime rights.

The convention does not deal with sovereignty questions, which the Philippine government says it did not raise.

Q: How did it start?

A: Although the disputes have simmered for decades, they gradually escalated under then  President Benigno Aquino III and culminated in 2012 when China took effective control of Panatag Shoal (international name: Scarborough Shoal), a rich fishing ground about 200 kilometers of Zambales province, after a two-month standoff.

US officials brokered an arrangement for Philippine government vessels and larger Chinese maritime surveillance ships to simultaneously withdraw from the tiny shoal, a deal that Aquino said he followed. The Chinese ships never left.

Chinese Coast Guard ships also surrounded another disputed area, Ayungin Shoal (Second Thomas Shoal), which has been guarded by Filipino Marines on board a grounded rusty warship. The Chinese Coast Guard has tried to block Philippine vessels from bringing food, water, medicines and other supplies to the garrison, sparking dangerous cat-and-mouse chases on high seas.

The Philippines said it had no other choice but to elevate the dispute to international arbitration.

Q: Will the arbitration change anything?

A: Any ruling will be final and legally binding on China and the Philippines. China’s decision to ignore the case and the arbitration tribunal’s lack of enforcement mechanism, however, have blunted the Philippines’ move.

Former Foreign Secretary Albert del Rosario, who spearheaded the filing of the complaint against China, said a favorable ruling on any of the 15 issues raised by the Philippines, especially the demand to declare China’s claims invalid under Unclos, would be a major blow to Beijing and a moral victory that could be harnessed by the Philippines to its advantage.

The Philippines, Filipino diplomats said, could work with Washington and other countries to demand Chinese compliance in diplomatic forums worldwide, including before the United Nations.

If it doesn’t comply, China risks being seen as a rogue nation at a time it expands its political and economic influence on the world stage.

Carpio painted a dire picture if the tribunal fails to rule on the validity of China’s sprawling claims, saying Beijing would enforce its nine-dash territorial line as its national boundary.

The US military would intensify its patrols to promote freedom of navigation, while China would try to push the Americans back and the claimants engage in an arms race.

“The only defense of coastal states will be to acquire warships, warplanes and antiship missiles,” Carpio said. “Tensions will increase. It will be a turmoil in the South China Sea.”

Q: Why did China refuse to take part in the case?

A: China has argued that the tribunal does not have jurisdiction to handle the Philippine case, because it says it involves sovereignty issues, which are outside the tribunal’s legal purview. While masking its case as an effort to clarify maritime rights under Unclos, the Philippines is actually trying to undermine China’s “indisputable sovereignty,” according to Chinese officials.

They ask, for example, how the Philippines can say that China’s claims are excessive without first determining Beijing’s territorial limits.

China also regards the disputes as a purely Asian problem that outsiders like the United States have no right to meddle in.

Philippine officials say China refused to join the arbitration knowing that the historical basis it cites for its territorial claims has long ceased to be recognized under modern-day treaties like the Unclos.

Q: What are other countries saying about it?

A: Other countries have generally taken a position on the arbitration case depending on whether they’re aligned with the United States or China.

The diplomatic tug-of-war has put smaller countries and regional blocs in a dilemma, including the Association of Southeast Asian Nations, four of whose member states are claimants.

A Philippine push for the 10-nation bloc to issue a joint statement calling for China to respect tomorrow’s ruling has stalled with Cambodia and Laos backing the Chinese position. Besides the Philippines and Vietnam, Malaysia, Indonesia and Singapore have also been wary of China.

The regional group has a bedrock principle of deciding by consensus, meaning just one member state can stall any group effort.

The United States, Britain and the rest of the European Union support the arbitration.

China claims support of some 40-60 nations, including many landlocked African nations and Pacific islands where Beijing has economic clout. AP