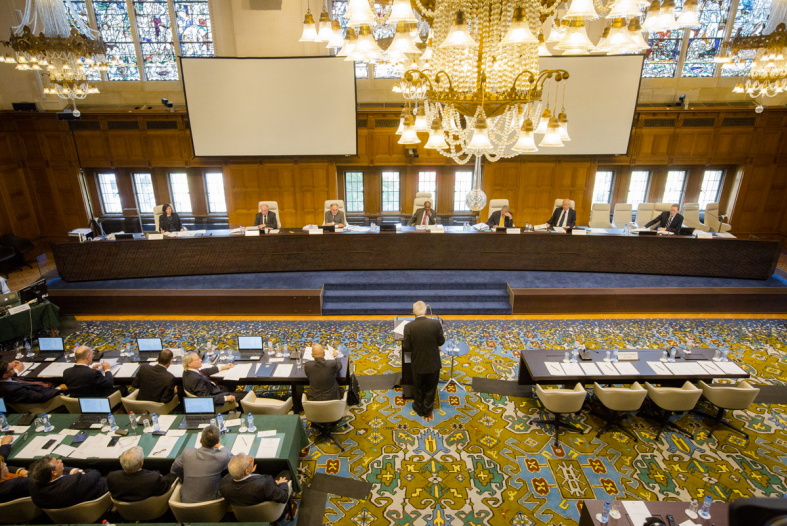 The United Nations Arbitral Tribunal in the Hague, The Netherlands, is expected to come out early this week with its verdict on the Philippines case vs China on its maritime dispute in the Sea South China Sea.

THE HAGUE, Netherlands — An international tribunal will hand down a ruling on Tuesday in an increasingly bitter dispute over the South China Sea, in a closely-watched case that risks ratcheting up tensions in Southeast Asia.

The Permanent Court of Arbitration (PCA) — the world’s oldest international arbitration tribunal — will issue a written decision at 11:00 am (0900 GMT) after the Philippines challenged China’s claim over much of the strategic waterway.

Manila lodged the suit against Beijing in 2013, saying after 17 years of negotiations it had exhausted all other political and diplomatic avenues.

Angered by the move, Beijing refused to participate, adding it would not comply with the ruling by a tribunal with “no jurisdiction” over the issue.

READ: China on war footing | Beijing will not ‘step back’ in South China Sea—media

Legal experts agree that after three years of deliberations, two hearings and nearly 4,000 pages of evidence, the court in The Hague is likely to find in Manila’s favor — in a decision with far-reaching ramifications.

“An award from the tribunal that rejects some of China’s more dubious claims would provide support for the mainstream views of other states in the region,” Cecily Rose, assistant law professor of Public International Law at Leiden University, told AFP.

“China is bound to comply with the award.

“But should it refuse to do so, the tribunal has no enforcement mechanism to which it can turn,” Rose said.

The judgment comes against the backdrop of frequent military brushes between China and its Asian neighbors the Philippines, Vietnam, Malaysia, Brunei and Taiwan, which ring the waters believed to hold untapped oil and gas reserves.

The tensions have also alarmed the United States which has key defense treaties with many regional allies, and in a show of strength last week sent warships to patrol close to some of the reefs and islands claimed by China.

Washington on Friday “urged both parties to comply with the ruling and urge all claimants to avoid provocative actions or statements”.

“Whatever the outcome, the case will not contribute to improved relations between China and other claimants in the South China Sea,” Frans-Paul van der Putten, a senior researcher at the Clingendael think-tank, told AFP.

Newly-elected Philippine President Rodrigo Duterte said he was optimistic of a favorable ruling, but offered to hold conciliatory talks with China. And he vowed he would not “taunt or flaunt” any favorable ruling.

Foreign Secretary Perfecto Yasay, also in a softening of Manila’s stance, said Friday the country was willing to share natural resources with China.

But China’s state-run media said Friday Beijing would not take “a single step back” in the waterway.

The Asian economic and military powerhouse claims most of the South China Sea, even waters approaching neighboring countries, as its sovereign territory, basing its arguments on Chinese maps dating back to the 1940s marked with a so-called “nine-dash line”.

Expert Joris Larik from The Hague Institute for Global Justice think-tank pointed out that Manila is aiming to “pierce” the nine-dash line, adding: “China’s position and credibility will be weakened if the arbitral panel finds against it.”

But Chinese President Xi Jin ping said Beijing was “not afraid of trouble” and state-run media urged China to prepare for “military confrontation” in the waters.

China launched drills in the sea on Friday, state media reported, with the navy carrying out combat exercises with live missiles, according to the PLA Daily, the military’s official newspaper.

Manila stresses it is not asking the court to resolve sovereignty or delimit boundaries, but is seeking decisions on some key points.

Referring to the UN Convention on the Law of the Sea, Manila contends the “nine-dash” line has no basis under international law and Beijing has no “historic” claim to the waters.

Manila has further argued that Beijing violated the convention by preventing it from exercising its fishing and exploration rights and that Chinese fishing boats have irreversibly damaged coral reefs.

The Philippine government also says some of the “islands” claimed by Beijing are merely rocks, and not entitled to a “territorial sea” or an exclusive economic zone.

Tensions between China and its neighbors in the sea have at times flared into open conflict, including in 1988 when Vietnam and China fought a naval battle on Johnson Reef in the Spratly Islands which killed about 70 Vietnamese.

The sea’s shipping lanes connect East Asia with Europe and the Middle East, and over $5 trillion (4.5 trillion euros) in ship-borne trade passes through them annually.