Beijing will not ‘step back’ in South China Sea—media 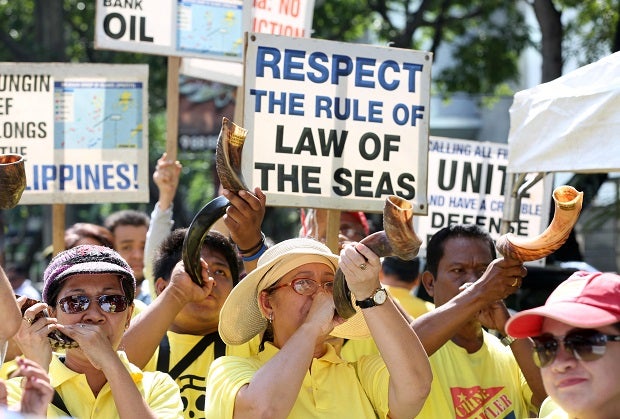 Environmental activists blow on horns in front of the Chinese Embassy in Makati City during a rally to protest recent moves by China in island-building at the disputed group of islands in the South China Sea. INQUIRER FILE PHOTO/ MARIANNE BERMUDEZ

BEIJING—Beijing will not take a “single step back” in the contested South China Sea, state-run media said Friday, despite reports of US naval patrols close to its artificial islands ahead of a tribunal ruling in the dispute.

Beijing asserts sovereignty over almost all of the strategically vital waters in the face of rival claims from Southeast Asian neighbors, and has rapidly turned reefs into artificial islands capable of hosting military planes.

It is currently holding a week of military drills around the Paracel Islands in the northern part of the sea, during which other ships have been prohibited from entering the waters.

The Virginia-based Navy Times reported this week that three US destroyers — the Spruance, Stethem and Momsen — have been patrolling near the Chinese-claimed Scarborough Shoal and Spratly Islands further south.

The aircraft carrier USS Ronald Reagan and supporting vessels are also in the South China Sea, the US Navy has said.

The Navy Times cited experts describing the deployments as “a message of resolve to the Chinese and US allies in the region” and “a deliberate show of force” ahead of an international tribunal ruling.

The Permanent Court of Arbitration (PCA) in The Hague is set to release its final decision Tuesday in a case brought by the Philippines, challenging China’s position.

In an editorial Friday the Global Times newspaper, which is close to the ruling Communist Party and often takes a nationalistic tone, said: “If the US and the Philippines act on impulse and carry out flagrant provocation, China will not take a single step back.”

Faced with further escalation from Manila, the paper said China “will fight back”.

It could turn Scarborough Shoal — an islet it wrested from Philippine control in 2012 — “into a military outpost”, it said, and “tow away or sink” an old landing craft Manila grounded on the Chinese-claimed Second Thomas Shoal in the Spratlys to “resolve the standoff once and for all”.

It blamed Vietnam and the Philippines for provoking tensions by carrying out reclamation work in the area earlier.

Beijing cites a vaguely defined “nine-dash line” on Chinese maps dating back to the 1940s as the source of its territorial claims, but Manila contests that the line has no basis under international law, and that Beijing has no historic right to the area.

Manila lodged the PCA suit against Beijing in early 2013, saying that after 17 years of negotiations it had exhausted all political and diplomatic avenues to settle the dispute.

Beijing has boycotted the proceedings, with an editorial in the China Daily newspaper Friday calling them a “farce” and the tribunal’s forthcoming ruling “illegal, null and void from the outset”, saying the court had no jurisdiction over the issue.

The ruling was likely to result in “increasing threats” to China, which “has to be prepared for all eventualities”, it said, adding: “This is not being alarmist, it is being realistic.”