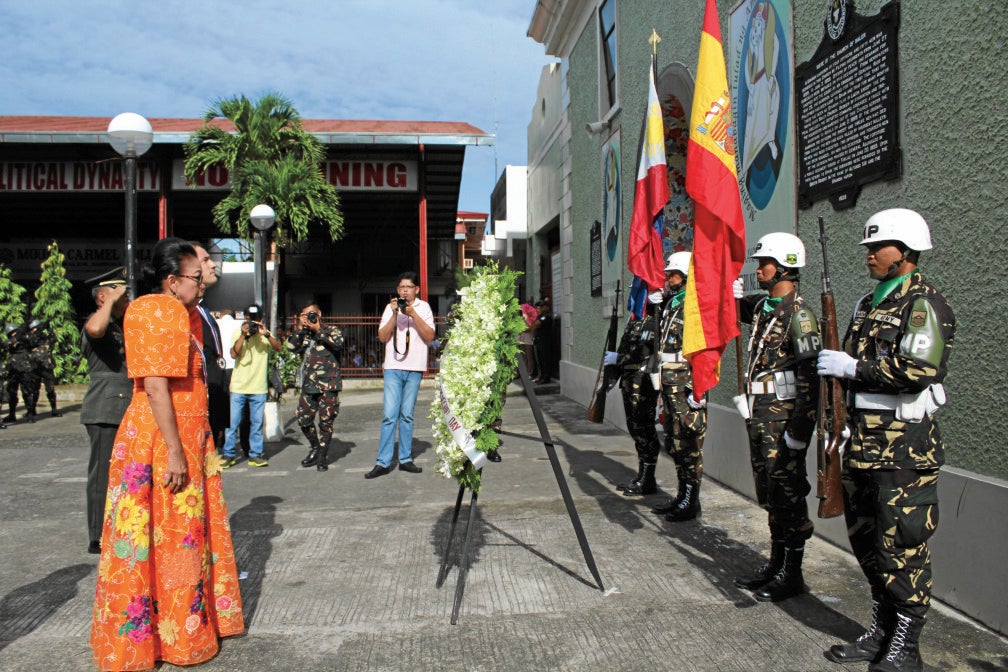 FRIENDSHIP DAY Patricia Licuanan, chair of the Commission on Higher Education, and Spanish Chargé d’Affaires Guillermo Escribano lay a wreath at the Baler Church, the last stand of Spanish soldiers in the Philippines. The siege ended on June 2, 1899, nearly a year after the end of Spain’s war with Philippine revolutionaries. TARRA QUISMUNDO

BALER, Aurora—It was a moment when a conquered people could have finally taken revenge. The enemy was stricken by disease, weakened by hunger and unaware that the war had long ended.

But as soon as the Spanish soldiers holed up inside Baler Church decided to lay down their arms on June 2, 1899, they walked out, not into a firing line, but into the welcoming arms of Filipino revolutionaries who chose friendship over retribution.

The cordial conclusion to the 11-month siege that was Spain’s last stand in the Philippines was recalled in solemn rites here on Tuesday, as the National Historical Commission of the Philippines (NHCP) and the Angara family led the celebration of the 14th Philippine-Spanish Friendship Day in this quaint surfing town by the Pacific.

“In the long history of the world, there are many sieges … where the victors killed all the losers. Except in Baler. The victors, the Katipuneros, were even ordered by President Emilio Aguinaldo to give them safe passage as friends rather than as enemies,” former Sen. Edgardo Angara said of the enduring story.

The Spanish soldiers, 35 survivors out of the 50 at the beginning of the siege, were escorted back to Manila.  They left Manila on July 20, 1899, and arrived in Barcelona 12 days later.

“The siege of Baler is the only siege where the victors spared the lives of the losers,” said the former lawmaker of his historic hometown where the curtains fell on the Spanish empire’s three-century reign in the Philippines.

Angara pushed for the passage of the Philippine-Spanish Friendship Day law in 2002, a measure credited for helping thaw what for a long time were icy relations between the two nations.

The commemoration has been held in the town annually every June 30, but this year, the rites were moved a few days later in deference to the inauguration ceremonies of President Duterte.

Spanish Chargé d’Affaires Guillermo Escribano and Commission on Higher Education Chair Patricia Licuanan, guests of honor at the event, laid a wreath at the Baler Church where a marker honors the historic turning point 117 years ago.

To this day, Angara said, the Philippines is the only former Hispanic colony that formally celebrates its friendship with Spain in commemorative rites.

“It’s part of our heritage. We cannot discard it, whether we like it or not. It’s my attempt at reminding the young generation that (the Spanish colonizers) also did us some good: (They gave us) our Western outlook and Western values. And that’s why we assimilate so easily in Western civilizations,” Angara said, referring to the 11-million-strong Filipino diaspora.

“This was the last point of contact between the Spanish empire and colonial Philippines. It’s really part of our history we shouldn’t forget,” said Angara’s son, Sen. Juan Edgardo Angara.

For NHCP Chair Maria Serena Diokno, the Filipinos’ gesture of goodwill toward their former conquerors showed that the revolutionaries had “a sense of justice and fairness.”

“The war with Spain was over, we had a new enemy, the United States, (so) what do we do with them? Throw them in jail?” Diokno said on the sidelines of the July 5 rites.

“OK, we fought them, they oppressed us for 300 years, but that was over. Do we hit our enemy just when he is already helpless on the ground? That’s not how Filipinos are. We even help them get up,” Diokno added.

Baler Mayor Nelianto Bihasa described the end of the siege as a moment when two warring sides stood side by side “as equals, no longer as master and slave.”

“[The siege] was ended just as then President Aguinaldo had wished: In a climate of friendship and generosity, and not in confrontation, vengeance or resentment,” Escribano said before government officials, business leaders, members of the diplomatic corps, local residents and students at the Plaza de Baler.

Nearly a decade and a half since Filipino-Hispanic friendship was first commemorated, relations between the two sides have been on an uptrend, from trade and investment to culture and education.

Economic cooperation between the two nations has brought in P9.2 billion in investments to the Philippines since 2003, according to the younger Angara.  The country’s Spanish links also opened doors to further trade with the European Union, he added.

This, from “zero” in 2002 just before the passage of the law, said the elder Angara. “There was really zero relations. We started on a clean slate—moving on, moving forward, rather than just regretting and blaming our past,” he said.

While the Philippines has largely lost the Spanish language, which was widely spoken in the country during the colonial era, it has been making a slow comeback through language training under the public school system, noted the younger Angara.

The senator said some 8,000 students from 80 high schools across the country took Spanish language training in 2015, an initiative that began six years ago. An estimated 200 teachers are gaining proficiency to serve as Spanish language instructors.

Senator Angara also made references to his father’s initiative to build the Manila-Acapulco Galleon Museum, a shrine to 250 years of colonial-era sea trade between the Philippines and Mexico that was considered to have begun international maritime commerce.

The P600-million museum is now under construction at SM Mall of Asia Complex by Manila Bay through funding from the family of shopping mall tycoon Henry Sy.

An international private sector initiative involving Filipino, Mexican and Spanish architects, designers, naval historians, scholars, architects and shipbuilders, the project aims to build a faithful replica of a galleon used at the time of the trade based on 18th century manuscripts.

The replica is estimated to cost at least P230 million. The elder Angara, who is still actively involved in cultural and historical preservation initiatives, and his international team are aiming for a soft opening this year and full operations by January.

The younger Angara said in his speech that the museum “will house our shared trading history that gave rise to modern-day trade and commerce.”

“A former Spanish minister likened our ties to a tree that has more roots than fruits. It means the roots of our relations are deep, but does it bear fruits? In my view, this is up to us. Personally, I see nothing but opportunities for growth and progress in the Philippine-Spanish relationship. How we harvest these fruits is entirely up to us and the coming generations,” the lawmaker said. TVJ