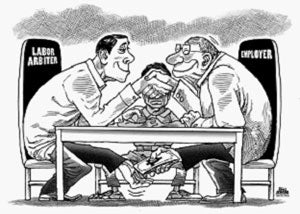 The case of one labor arbiter named Wilfredo Wagas, who stands accused of extorting cash from a spa owner, is one of many sad yet abominable cases of corruption that pervades the national government even during the tenure of the supposedly “cleaner” Aquino administration.

One need only cite a quote from Wagas to learn just how ingrained corruption is within the Department of Labor and Employment. “Ang sayop nako nitabang ko sa tawo nga swapang. Sa kadako sa iyang na-save unya risgo pa kaayo ko ana (My mistake was I helped someone who’s selfish, considering the amount he would save and I would risk myself for that),” Wagas was quoted as having told reporters last week.

The “he” Wagas referred to was businessman Johnie Lim, owner of the Body and Sole Spa, who supposedly offered the labor arbiter P5,000 in exchange for settling a labor dispute with the employees.

Lim alleged that Wagas accepted the money but later texted him and demanded more for his services. Lim complained to the authorities and a sting operation landed Wagas behind bars where he faces graft charges.

Wagas hardly made any denials about accepting the money from Lim, but denied citing any amount as additional pahalipay or “token” from the businessman. In justifying his action, Wagas said most companies offer tokens to the DOLE arbiters in exchange for their services in settling disputes with the employees.

Were it not for his efforts, Wagas claimed, Lim would be forced to pay more than P600,000 in benefits and wages to his employees. We could only hope that Wagas was misquoted when he admitted about the payment of tokens by companies to DOLE arbiters.

The incident only served to embarrass Regional DOLE-7 Director Exequiel Sarcauga, as it reduced the department’s labor arbiters to nothing more than hucksters or fixers out to make a fast buck at the expense of both the companies and the employees.

And unless business owners like Lim stand up to arbiters like Wagas, this racket will continue unabated. Is the department doing anything to encourage the companies to report these arbiters to them so they can sanction these people? Sadly no.

Wagas posted a P20,000 bail after being charged and the public expects Sarcauga to place him in the freezer until the cases are resolved against him. But Sarcauga should also initiate a massive cleanup of the department’s ranks to see whether there are any more arbiters like Wagas to encourage companies and employees to speak up.

However, based on the turtlelike pace of the wage increase consultations, which started only a few days ago, an exasperated public can only resign themselves to Sarcauga’s seeming inability to discipline his people and prevent extortion-happy arbiters from pursuing more under-the-table arrangements with companies facing labor problems.

ADVERTISEMENT
Read Next
Building official: Securing permits bypassed to allow use
EDITORS' PICK
Defend Your Health! Shop health essentials from home with Rose Pharmacy’s Online Sale
COVID-19 wards in 2 more hospitals reach full capacity
Navotas will be on lockdown from July 16 to 29 – Tiangco
Water remains our saving grace right now
World-standard accounting: Unlocking your financial potential
Chatting with companions, answering calls on MRT 3 trains banned
MOST READ
Vilma Santos-Recto ‘prepared’ to face ‘consequences’ over ABS-CBN franchise vote
‘I am not my father,’ says daughter of lawmaker who voted to deny ABS-CBN franchise
Did a meme get on Agot Isidro’s nerves? She’s asking ’24 Oras’ to fact-check it
In slap on face of PH, China replies to Locsin on tribunal ruling: It’s invalid
Don't miss out on the latest news and information.