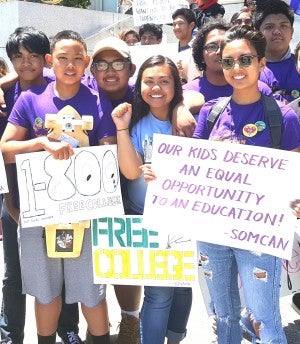 SAN FRANCISCO — Chanting “No cuts, no fees education, should be free!” San Francisco residents from different walks of life staged a rally recently at the steps of San Francisco City Hall to push for a tuition-free City College.

Leaders and representatives of different education advocacy groups, including teachers and nursing union members, school board members and students joined members of San Francisco Board of Supervisors who took turns explaining the benefits of the Free City College measure that will be on the November ballot.

Main sponsor of the measure District 6 Supervisor Jane Kim noted the widespread anxiety about affordability of housing and education and the availability of opportunities in San Francisco.

“California has long promised that community college should be free to all (state) residents… so we want to figure out a way to make city college free again,” Kim said in an interview.

City College tuition is currently $46 a unit, or just over $1,100 a year for full-time students. Kim’s plan would cost around $12 to $12.9 million annually. She proposes to pay for it with $29 million from a new transfer tax she calls the Mansion Tax.

”In December we introduced a Mansion Tax that would put a tax on real estate transfers of buildings and homes of $5 million and above. We cannot stop the luxury housing market here in San Francisco, but we can certainly ask those who are part of it to pay a little bit more to make San Francisco more affordable for everyone,” explained. “This will generate more than double the amount of funds needed to make City College free again for all San Francisco residents.”
Kim and other rally speakers hailed community college as an important tool for for high school graduates to get higher education leading to higher earnings but not be saddled with debts for getting educated. It is also a tool for adults who want to go back to school advance or switch careers. 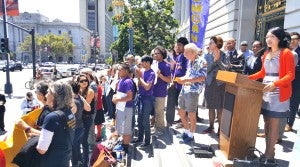 “I am very excited that if our proposal passes in November, we will be the first city in the country to make community college free for all of our residents regardless of age, income or any type of GPA prerequisite,” said Kim.

She added: “Our measure is polling to the roof so we are very confident (that it will pass), but we are still asking all to come out and support this ballot measure in November.”

Kim believes that there is a need to reverse the tide on rising tuition, to go back to the days when California had the best public education system in the country partly by making higher education affordable again.

“Poverty, thus needing to work, is one reason for dropping out,” Araullo maintains. “It is important to have this measure pass here. If San Francisco can provide free city college for students, it is not inconceivable that this will spread throughout the country. And this will benefit all youth in the United States.”

For her part, Angelica Cabande of the South of the Market Community Action Network (SoMCAN) said poor San Francisco families’ limited resources go to either rent, everyday amenities and other expenses, and that it is really challenging for young people to have money for college fees.

“That’s why we are here today to demand that City College be free to everyone so that they will have the opportunity to continue their education after high school in the face of high cost of living in San Francisco,” Cabande said. 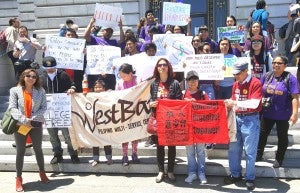 “These are the young people that would contribute back to San Francisco as firefighters, nurses, teachers and the like. These are the people we need to come back and stay in San Francisco and not be forced out of the city that they love,” Cabande added.

High school student Lerida Madriaga, who may either be a doctor, nurse or an FBI agent someday, thinks the initiative to make community college free is a no-brainer because there are students who do not have the opportunity to go to school for financial reasons.

“And it is really important for everyone like those in high school to get the same opportunities to go to college if they want to learn. The same goes for those who are finished with college and still want to go back to school. This will be a great opportunity for them to learn anything that they did not in the past,” Madriaga stated.

“I feel the community college should be free to people in general. School today is expensive to go to. I for one am struggling just trying to pay for my classes exclusive of payment for rent and textbooks. It is very hard. This is something that should be implemented across the nation. San Francisco is a very good starting point for that as we have a lot of youth whose idea of going to college is suppressed because it is unaffordable in a city like this,” Amable asserted.

Her 8th grade brother, Fortunato, who may join the military after college, says community college will help those like him who comes from a low-income family living four people to a room in the Tenderloin.

“I know some people and friends of mine who want to go to college but do not have enough to do so,” Fortunato said. “We cannot afford to drop out of school. What will happen when parents are gone? The next thing you know you’ll be living in the streets. After college, I will help my mom and dad out of the stress they are in due to money problems.”