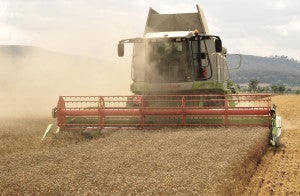 A group of newspaper editors from the Philippines are visiting June 9-18 as part of a U.S. Wheat Associates tour.

The Philippines last year unseated Japan as the largest market for soft white wheat, grown almost exclusively in the Pacific Northwest. It purchased more than 800,000 tons last marketing year, which ended May 31.

Customers in the Philippines also bought more than Japan several years ago. The Philippines was also the top buyer for hard red spring wheat, said Shawn Campbell, assistant director of U.S. Wheat’s Portland office, according to a Capital Press report.

Import of U.S. wheat to the Philippines is expected to rise as the Philippine economy improves and more flour mills are constructed to meet market demand. The market for flour has increased by 5 to 6 percent annually.

So far, the editors’ tour has included a tugboat ride on the Willamette River, an export elevator, the Federal Grain Inspection Service, Washington State University breeding program and greenhouses and shuttle-loading facilities in Lewiston, Idaho.

The wheat producers also want to show why grain from competing countries may be cheaper but not as reliable as U.S. grains. Pinca said that should explain why Filipino wheat marketers tend to buy exclusively from the United States.