Gadhafi nephew had ‘house of gold’ but didn’t pay maids 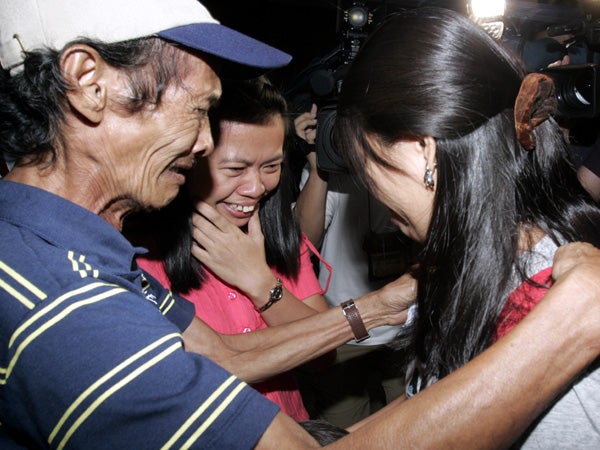 Moammar Gadhafi’s nephew had “a house full of gold” but refused to pay the wages of his Filipino domestic helpers.

Two housemaids managed to escape from Libya with the help of a Filipino labor attaché last week, but two other Filipino househelp have chosen to remain, hoping they would still be paid.

Diana Jill Rivera, 30, and Mary Ann Ducos, 29, arrived in Tripoli within a week of each other in September 2010 to work as housemaids for Sharif Sahal, said to be a nephew and righthand man of the fallen Libyan dictator.

“Tripoli is a big place. It may be a city but we lived in a farmhouse,” recalled Rivera.

Sahal’s property was a sprawling mansion with a garage that housed 13 luxury vehicles.

“They did not have horses or carabaos, but camels,” Rivera said.

Ducos said the furniture was “made of gold, even the sofa.” Asked whether she meant gold-plated, she replied: “All the objects I saw, I was told came from abroad.”

Both women said Sahal was nice in the beginning. They were paid on time, but for the first two months, all their wages went to the recruitment agency.

The trouble began early this year when democracy activists started massing in the streets to protest the way Gadhafi was running the country.

Rivera recalled that the dictator’s nephew would become hostile “whenever we asked for our wages, saying the banks were closed and he could not get money.”

The tensions and hostilities in the country became unbearable and the two maids decided they must find some way to leave.

“One other Filipino maid beat us to it. She ran away and we never heard from her again,” Rivera said.

Their pleas to be released from employment fell on deaf ears until last August when Sahal  allowed them to leave at their own risk, they said.

“The city was so chaotic we did not know where to start,” Rivera said.

Phone calls were made to relatives back in the Philippines. The relatives in turn went to the Manila-based Blas F. Ople Policy Center for overseas Filipino workers.

The center’s director, Susan Ople, alerted Labor Attaché Nasser Mustafa of the Philippine embassy in Libya about the women’s situation.

According to Ople, Sahal initially refused to release the women, insisting they were safe.

On September 17, a battalion of armed rebels ransacked Sahal’s farmhouse. Mustafa took this as his cue to rescue the Filipino workers with the help of a driver and a Libyan friend and take them to the border into Tunisia.

“There were still two Filipino maids in the household when we left. It was their choice not to leave because they are still hoping that Sahal would take pity on them and they would be paid,” said Rivera.

Rivera and Ducos went to the Senate on Wednesday to witness Mustafa receive a commendation.

In a resolution, Senate President Pro Tempore Jose “Jinggoy” Estrada, the labor committee chairman, hailed Mustafa and his rescue team’s “courage and devotion” during the rescue of the two women.

Ambassador to Libya Al Vicente was also cited “for the rescue and repatriation of thousands of other distressed OFWs from Libya.”