Aquino back from Japan with $1.4B in pledges | Global News
Close
menu
search

Aquino back from Japan with $1.4B in pledges 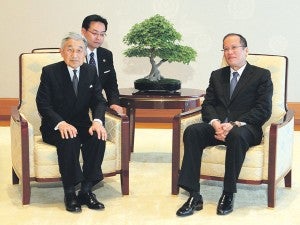 EMPEROR MEETS AQUINO President Aquino poses with Emperor Akihito during his audience at the Imperial Palace in Tokyo on Wednesday. A man behind Akihito is an unidentified interpreter. The President arrived in Manila Wednesday night after a four-day visit to Japan. RAFFY LERMA

President Benigno Aquino III returned Wednesday night from a four-day visit in Japan, bringing home more than $1.4 billion in fresh investments and support for a multilateral solution to the disputed Spratly Islands.

“I have mixed emotions,” Mr. Aquino said on arrival in Manila, noting the battering the country got from Typhoon “Pedring” and a new storm brewing in the Pacific.

“There is no doubt with the success of our trip, where we had 36 meetings that generated $1.4 billion in investments that are assured of coming in from Japan,” he said. The  investments will be in energy, manufacturing and services.

Before flying back to Manila, Mr. Aquino attended a state luncheon hosted by Emperor Akihito at the Imperial Palace.

The President earlier described the meeting as “personal” to him, noting that his late mother, former President Corazon Aquino, had been invited to the Emperor’s ascension to the throne in 1989.

“We thank the dear Emperor very much for his invitation and for the opportunity to continue the good relationship between our two countries,” he said in Filipino.

Officials said before the President’s departure from Tokyo that Mr. Aquino was returning home with an estimated $1.1 billion in private investments and another P5.87 billion in disaster management project.

In a joint statement following Tuesday’s bilateral talks with the President, Prime Minister Yoshihiko Noda said Japan would continue its assistance to the Philippines as an “important ODA target country.”

This means that the Philippines would keep the $3-billion ODA aid despite the March 11 earthquake and tsunami that severely affected Japan’s economy.

With Japan now on board, Mr. Aquino expressed confidence in the government’s position that the only way to resolve the territorial dispute over the Spratly Islands in the West Philippine Sea (South China Sea) was to get all six claimant countries involved.

“Our position is Asean centrality,” he said, referring to Association of Southeast Nations. Four of Asean’s 10 members—the Philippines, Vietnam, Malaysia and Brunei—plus China and Taiwan lay claim to the potentially oil-rich group of islands.

China wants a bilateral solution to the conflicting claims. However, Mr. Aquino noted that  “China has given us some signs that they are still committed to a peaceful resolution.”

Mr. Aquino and Noda stressed “the need for a rules-based regime for addressing and resolving disputes and promoting cooperation” in the region.

They also “expressed their hope of the early formulation of a legally binding code of conduct that is consistent with established international law.”

“The two leaders confirmed that the South China Sea is vital, as it connects the world and the Asia Pacific region, and that peace and stability therein is of common interest to the international community,” according to the joint statement.

“As leaders of countries sharing lines of communication, they also confirmed that freedom of navigation, unimpeded commerce, and compliance with established international law, including the UNCLOS, and the peaceful settlement of disputes serve the interests of the two countries and the whole region.”

In his talk with reporters, Mr. Aquino said occupying and exploiting the disputed territory without a binding resolution among all claimants would not serve China well.

“How does that engender better trade for any other country, especially even the countries outside of the claimant countries?” he asked.

“You may gain here, but you lose the rest of the world… you won’t enter into something that would not be beneficial to your country.”