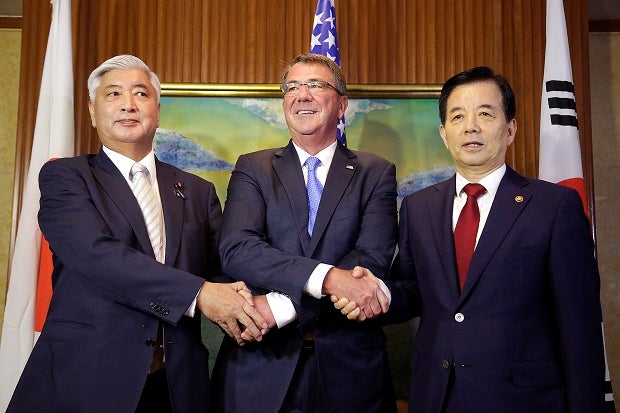 In this Saturday, June 4, 2016 file photo, U.S. Defense Secretary Ash Carter, center, meets with Japan’s Defense Minister Gen Nakatani, left, and South Korea’s Defense Minister Han Min Koo during their trilateral meeting on the sidelines of the 15th International Institute for Strategic Studies Shangri-la Dialogue, or IISS, Asia Security Summit in Singapore. China has reiterated its refusal to abide by any ruling from a U.N. arbitration panel over its claim to almost all of the disputed South China Sea. Speaking at the Shangri-la Dialogue regional security conference in Singapore, Rear Adm. Sun Jianguo also called on nations without a direct claim to territory in the region to stay out of the dispute, a reference to the United States and its allies including Japan and Australia. AP FILE PHOTO

BEIJING — Even before a ruling, China may have lost by refusing to cooperate with a UN arbitration tribunal over its South China Sea claims. Yet Beijing seems prepared to absorb the cost to its reputation, confident that in terms of territory and resources, it won’t lose a thing.

Despite pressure from Washington and elsewhere, China appears determined to avoid granting any hint of legitimacy to a process that might challenge its claim to ownership of virtually the entire South China Sea, including its islands, reefs, fish stocks and potentially rich reserves of oil and gas.

The collateral cost, analysts say: harm to global efforts to resolve similar territorial disputes through legal means. By its actions, China is demonstrating that countries can reject such measures whenever they conflict with their interests.

The case before The Hague tribunal, filed by the Philippines, centers on the applicability of China’s vaguely drawn “nine-dash line” South China Sea boundary under the United Nations Convention of the Law of the Sea, or UNCLOS. A decision is expected sometime within the next several weeks, but since there is no enforcement mechanism, its potential impact is unclear.

Along with China and the Philippines, four other governments — Brunei, Malaysia, Taiwan and Vietnam — also claim islands and reefs falling within the nine-dash line, while Indonesia has expressed concern about the Chinese boundary overlapping with its exclusive economic zone.

For months, Chinese officials, state media outlets and high-ranking military officers have maintained a relentless stream of invective against the Philippines’ pursuit of arbitration, calling it unlawful, illegitimate and a “political farce.”

“The South China Sea arbitration unilaterally initiated by the Philippines is nothing but a political scheme for one party to insult the other and will be recorded as an infamous case in the history of international law,” Vice Foreign Minister Liu Zhenmin told a group of visiting reporters in Beijing earlier this month.

That the panel is headed by a former diplomat from China’s old nemesis, Japan, makes it even more worthy of derision, Chinese critics say.

“The ruling can’t be objective and fair, and we won’t be giving up our historical rights simply to make China look good,” said Wu Shicun, president of the National Institute for South China Sea Studies.

Seeking to win over global opinion, both China and chief Philippine ally the United States have been lining up friendly nations to back their positions. Yet, with the exception of Russia, which has been expelled from the G7 and is under heavy international sanctions, those whose support Beijing’s claims are mostly small states from outside the region with little influence over the dispute.

Even government-backed scholars such as Wu say that the case is a no-win situation for China.

“Whatever the result, this is a definite loss for China since we’ve been forced to assume a passive role,” Wu said.

Regardless of China’s arguments denying the panel’s legality, it “will damage China’s reputation and image,” said Yun Sun, an expert on Chinese foreign policy at the US Stimson Center think tank. However, Sun said that’s considered a relatively small price to pay to retain control over the “tangible real territory,” far more important than any question of “face.”

“Given the stakes in oil, natural resources and strategic depth, I suspect the Chinese government is willing to pay that price,” agreed Michael Desch, co-director of the International Security Program at the University of Notre Dame in the US.

Within the context of what China perceives as a relentless US campaign to contain its rise to prominence, Beijing’s officials see an American plot behind the case.

“We don’t understand why the US has been so active in backing the arbitration behind the scene,” said Liu, the vice foreign minister. “As time goes by, I believe the plot will eventually come to light.”

Despite its island-building efforts and military buildup in the South China Sea, China has shown some signs of restraint in not expanding its claims or vigorously seeking to eject other countries’ militaries from islands it claims.

While it has barred the Philippines from disputed Scarborough Shoal ever since winning a 2013 maritime standoff, it has shown no recent signs of carrying out the sort of massive reclamation work there that it has on other coral reefs, including building ports and airstrips atop them.

That may be an attempt to retain some credibility over its repeated evocations of the 2002 Declaration on the Conduct of Parties in the South China Sea signed between China and the 10 members of the Association of Southeast Asian Nations.

That document states that parties concerned “undertake to resolve their territorial and jurisdictional disputes by peaceful means, without resorting to the threat or use of force.”

Its reference to the use of “friendly consultations and negotiations by sovereign states directly concerned,” underscores China’s insistence that bilateral negotiations are the only way forward, something critics call a transparent attempt to divide the disputants and keep the dispute off the agenda of multilateral mechanisms.

US Defense Secretary Ash Carter has warned that developing Scarborough would be seen as “destabilizing” because of its proximity to the Philippines’ main islands, where the US has a small military presence.

China appears to be holding out the possibility of coaxing the Philippines into bilateral talks that have so far gone nowhere. Philippine President-elect Rodrigo Duterte has shown indications of being more flexible on the issue than current President Benigno Aquino III.

Based on his remarks so far, Duterte, who takes office on June 30, is unlikely to follow Aquino’s hard line stance against China, said Jay Batongbacal, who heads the Institute for Maritime Affairs and Law of the Sea at the state-run University of the Philippines.

Regardless of Duterte’s approach, Philippine ambassador to Washington Jose Cuisia predicted a diplomatic standoff if China ignores a negative decision.

“We will be pointing out that China is not following the rule of law,” he said. “I don’t think they want to be pictured as a rogue nation. So they will probably sit down with us and say, ‘OK, can we settle this in a diplomatic manner?'”

Whatever the outcome, China’s refusal to cooperate with the tribunal could harm efforts to promote international arbitration that have already been hamstrung by the occasional refusal of the United States and others to recognize the International Court of Justice and other institutions.

China’s noncompliance is also damaging to UNCLOS itself, since it could discourage compliance with other features of the convention, particularly its establishment of 200-nautical mile (370-kilometer) exclusive economic zones, said James Kraska, a professor of oceans law and policy at the US Naval War College.

“The only way developing states have a stake in the system,” Kraska said, “is if it is governed by the rule of law in which the law binds the strong states as well as the weak.”