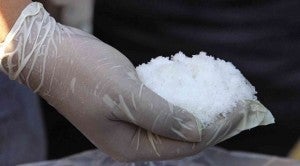 MANILA — Two Taiwanese nationals were caught with P195-million worth of narcotics in a joint operation by the Philippine National Police (PNP) and the Philippine Drug Enforcement Agency (PDEA) in Parañaque City on Tuesday.

A report from the PNP Anti-Illegal Drugs Group showed that Shion Ming Tseng, 33, and Zhen Kai Huang, 25, were arrested at 1:30 p.m. along Macapagal Boulevard, in front of a hotel in Barangay Don Galo.

The police intercepted the suspects as they were on their way to deliver narcotics to Cavite province, said PDEA Director General Arturo Cacdac, in a radio interview.

Seized from the suspects were around 39 kilos of “shabu” (methampethamine hydrochloride).  SFM