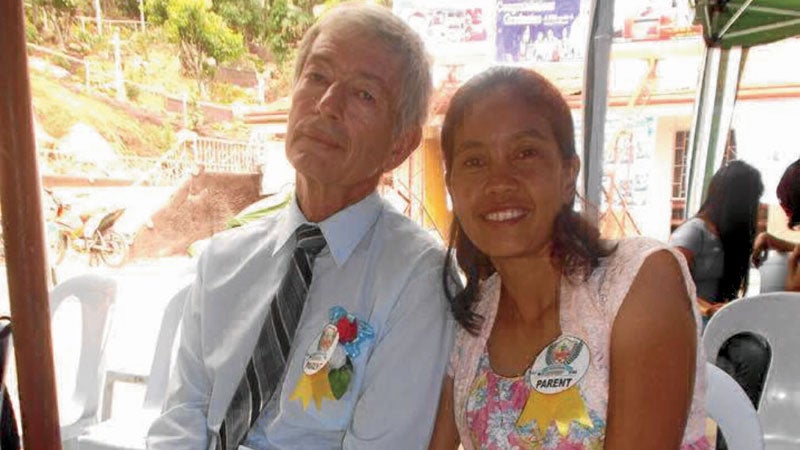 ABU BRUTALITY Canadian Robert Hall was reported killed by the Abu Sayyaf after the deadline lapsed for the payment of ransom. He is shown here with his live-in partner, Maritess Flor, who is being held captive by the Abu Sayyaf. CONTRIBUTED PHOTO

ZAMBOANGA CITY—Abu Sayyaf kidnappers on Monday announced that they had beheaded another Canadian hostage in Sulu province, taunting incoming President Rodrigo Duterte on his promise to exert his best efforts to recover him alive.

The body of mining consultant Robert Hall will just be discovered somewhere in Jolo, the capital town of Sulu, Abu Raami, spokesperson of the notorious bandit group, told the Inquirer.

“We assure that the body will be brought to Jolo for everyone to see,” Raami said. “We cannot jeopardize our location.”

Armed men seized Hall, Canadian John Ridsdel, Norwegian Kjartan Sekkingstad and Filipino Maritess Flor from an exclusive marina in the Island  Garden City of Samal in Davao del Norte province on Sept. 21 last year, and handed them over later to the Abu Sayyaf in Sulu.

The kidnappers beheaded Ridsdel on April 25 after they failed to get a P300-million ransom.

In Manila, the Armed Forces of the Philippines said it was still verifying the death of Hall, several hours after the 3 p.m. deadline for payment of a P600-million ransom for him and the other hostages lapsed.

“As of now, we have no confirmed information regarding that. I have contact with the Western Mindanao Command and the information is that they are just continuing with their support operations,” said Col. Noel Detoyato, chief of the AFP public affairs office.

Malacañang gave assurance that it was firm in its bid to go after the Abu Sayyaf and rescue the hostages.

“Our focused military and law enforcement operations continue without letup with the objective of rescuing the hostages and holding their captors accountable for their crimes,” Presidential Communications Secretary Herminio Coloma Jr. said in a text message to reporters.

Coloma made it clear that the government had “not wavered in its determination to deal with the kidnap-for-ransom problem.”

The Canadian government said it had received the sad news of Hall’s execution.

Rachna Mishra, deputy director for media relations of Canada Global Affairs, said her government was in close contact with Philippine authorities on the matter.

“We are pursuing all appropriate channels to seek further information and are in close contact with Philippine authorities,” Mishra said in an e-mail to the Inquirer.

Some four hours before his captors reported his death, Hall repeatedly appealed for the Philippine government’s help.

“If Duterte wants to help us, help us to get out of here,” he said.

At the time of the interview, Hall could not say what would happen to him and his fellow hostages if the deadline for ransom payment expired. He said he was informed that their lives might end that day.

At 3:10 p.m., Raami told the Inquirer by phone that even with the observance of the holy month of Ramadan, the Abu Sayyaf leadership had decided to behead Hall to serve as a challenge to Duterte.

The incoming President, in a press conference last month, said he had apologized to Canadian Prime Minister Justin Trudeau for the death of Ridsdel and “assured the Canadian  government that Ridsdel will be the last (hostage killed by the Abu  Sayyaf).”

“I said, ‘Mr. Prime Minister, please accept my apology for the incident. I  am very sorry for the incident that happened which resulted in the killing of your national and we will try our very best to see to it that nothing of this nature will happen again,” Duterte recalled telling Trudeau.

“And you are rest assured that when the time comes, we will be able to  apprehend the criminals and bring them to justice. There will be a time when  I say, ‘surrender and release all hostages,’” he added.

On Monday, there was no immediate reaction from Duterte’s media aides. They earlier said he was not holding interviews and press conferences as his way of boycotting media that have been critical of him.

“Now we are left with Maritess (Flor) and this Norwegian. Ransom is P300 million and we have two, that means P600 million,” Raami said.

He said the group had kept its lines open since the day it announced the June 12 deadline through a video released on May 30. “No one listened,” he said.

Flor, 38, also called on the government to help the hostages. “We don’t want a repeat of what happened to Ridsdel,” she said in an interview on Monday morning.

Their captors were hurting them, she said. “They maul us. They slap me.”

Sekkingstad said he was able to speak with his brother on Sunday night.

“We do our best, but it’s not enough to meet their demand. We don’t know for sure. Four of us start with and when deadline not met, one was beheaded. We are kept in the dark. I really don’t know what is happening,” Sekkingstad said in a separate phone interview.

Flor’s mother, Flordelisa, told the Inquirer on  Monday morning that her only hope was Duterte. “We are now totally leaving our daughter’s life in the hands of Duterte. I  hope he can save her,” she said.

She said she was told by government agents who visited her home in Bukidnon province that apart from the efforts of the present administration, Duterte was also trying to help the kidnap victims.

On May 22, the Abu Sayyaf released a video featuring its unkempt, emaciated hostages begging Duterte to save them from being beheaded.

Detoyato said the last information the military received about the victims’ condition was from the most recent video uploaded last month by the kidnappers.

Asked if the AFP would be surprised if the kidnappers would carry out killings during Ramadan, Detoyato said: “They don’t observe any religious practices, they will violate anything.”

The National Ulama Conference of the Philippines (NUCP) condemned the beheading of Hall as “un-Islamic” and “inhuman.” It also criticized local politicians for allegedly not doing their part in working with security forces to ensure the safe release of the victims.

“We are saddened, too, by the insensitivity of the government, especially  the LGUs from regional to provincial to municipal to barangay, and their  lack of cooperation with the PNP and the AFP to eliminate this terrorist  group,” said Alih Aiyub, national secretary general of the NUCP.

Sulu Vice Gov. Abdusakur Tan described the beheading as “a beastly  and un-Islamic act just for their greed for money.”

“They are animals,” Tan told the Inquirer.

Dr. Samsula Adju, chair of the Moro National Liberation Front (MNLF) Global Roving Diplomacy and Peace Advocacy, said that if Hall was indeed beheaded, “maybe they did not listen to the MNLF’s request” not to kill the hostages.

The MNLF was instrumental in last month’s release of 14 Indonesians and  four Malaysians held by the Abu Sayyaf. With reports from Julie M. Aurelio, Christine O. Avendaño and Estrella Torres in Manila; and Karlos Manlupig, Inquirer Mindanao